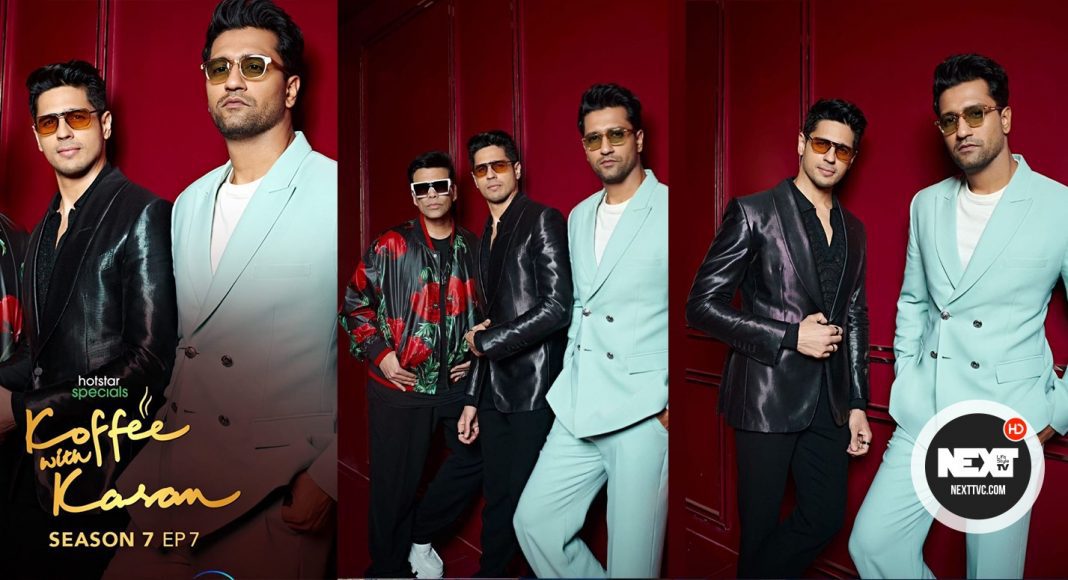 This week's Koffee With Karan 7 will feature Vicky Kaushal and Sidharth Malhotra. Their conversation over Sidharth's and Vicky's weddings will delight you.

The upcoming episode of Season 7 of Koffee With Karan will feature Vicky Kaushal and Sidharth Malhotra, and the entertaining trailer for the episode is already out. The discussion centres on Vicky and Karan Johar’s plan to get Sidharth to confirm his engagement to Kiara Advani, who has been widely reported to be his girlfriend. Did Sidharth finally cave and manifest a future with Kiara, though? Well, the advertisement does raise that important topic, and viewers should be intrigued.

The next episode of Koffee With Karan 7 features a preview in which Karan and Vicky work together to question Sidharth about his relationship with Kiara Advani. After establishing that he and Kiara are dating, Karan asks Sidharth whether he has given any consideration to the future with Kiara. Sidharth was surprised upon hearing it, while Vicky joined KJo in taunting him in the commercial. Sidharth found it difficult to tell Kiara Advani, his girlfriend, that they were getting married because of the couch’s track record of making manifestations come true. Sidharth Malhotra, ever the independent thinker, had different ideas. Fans are left hoping that he means a future with his girlfriend, Kiara Advani, when he remarked, “I manifest a brighter and joyful future.”

And that’s not all; Sidharth and Karan also make fun of Vicky’s rumoured Roka with Katrina Kaif on the show. Vicky also let’s slip what Katrina thinks of the many shirtless photographs he publishes on Instagram.

The episode should satisfy Sidharth-Kiara and Vicky-Katrina watchers. The recent rumours that Sidharth and Kiara would reteam for another film after Shershaah have also made the news. According to a recent report, Sidharth and Kiara may be teaming up for a romantic comedy called “Adal Badal.” Even though the rumoured pair haven’t confirmed their relationship, their admirers are already making it real.

Fans of Sidharth and Vicky are in for a real treat on the next episode of Koffee With Karan, which airs on Thursday at midnight on Disney+Hotstar.