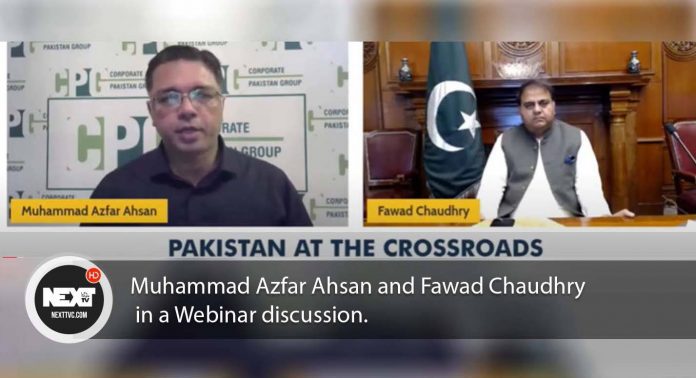 Federal Minister for Information & Broadcasting, Mr. Fawad Chaudhry said that as far as the situation of COVID is concerned, there is a crisis but no panic.

He was in a webinar discussion held from the CPG Dialogue platform titled ‘Pakistan at the Crossroads’ with Muhammad Azfar Ahsan, Founder of Corporate Pakistan Group (CPG) and Nutshell Group.

Speaking at the webinar he said,

“When the first wave struck, we were totally unprepared and were not making any of the required apparatus etc. locally, but in the past two years we have learned a lot and prepared ourselves, so we are tackling the situation even though we are facing the highest percentage that is 11%.”

Commenting on vaccinations in the country he mentioned that so far over 1.8 million people have been vaccinated in Pakistan.

“Our first target is to vaccinate 26 million people and later scale it to 100 million individuals for vaccines in the second phase.”

The Minister was concerned about the increasing danger as the end of Ramadan is close where people usually flock at mosques and shopping centers; he expressed hope that people at large will act sensibly and consider the gravity of the situation.

He said he was thankful to the organizers of Raiwind annual congregation for canceling their event. About shortages of vaccines, he said the government is making every effort to acquire them but at the moment only two countries – China and Russia – are exporting as India has stopped the export of vaccines due to its current situation.

Fawad Chaudhry also talked about the Information Ministry and said that he is determined to revamp the ministry and its operations by bringing about structural changes.

Expressing his views about The Associated Press of Pakistan (APP), he said that APP needs to be digitalized to bring it at par with news agencies like Reuters, AFP and others in order to cope with the global challenges.

On a question by Azfar regarding image marketing of Pakistan as part of the Information Ministry responsibilities, Fawad Chaudhry pointed out the paucity of capable human resources.

On the subject of improving local talk shows, he said he cannot interfere with private channels. He also pointed out that in other countries sports get the majority of advertisements followed by entertainment shows and politics, but in Pakistan, it is quite the contrary.

Answering a question about entering into negotiations with TLP after declaring it banned, he said not only the government, but businesses should also stop supporting organizations that resort to violence. He said it is a formidable task and all concerned departments are looking into this.

In response to a question about any hope of improvement in Karachi he said that unfortunately after the 18th Amendment, it is not possible for the Federal Government to intervene much, and Sindh Government has no appetite for the development of Karachi.

He said that the Rangers have been in Karachi since 1990 and the Sindh Government pays them a hefty amount each year but has not been able to develop its own police force yet. He also iterated that Governor rule is not possible after the 18th Amendment.

About India Pakistan relations Mr. Chaudhry said India needs to show solid steps that include reversal of Kashmir to its original position as we cannot make peace by ignoring people of Indian occupied Kashmir.

Answering a question about election manifesto points accomplished by PTI in the last three years he said that the first priority was making sure that the law is the same for the powerful as well as the weak; then the promised housing projects which are underway, and the EHSAAS program were undertaken.