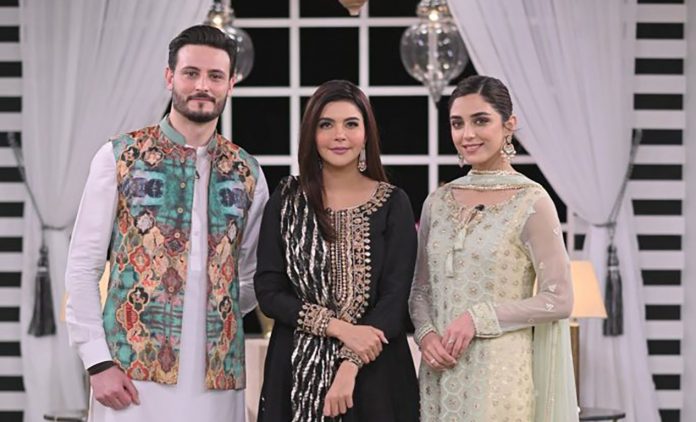 Maya Ali and Osman Khalid Butt have one of the best friendships in Pakistani dramas, and they have earned the nickname “Osmaya” from fans. They are the most adorable pair of friends you will ever see on the internet. These two Best Friends Forever just went on Nida Yasir’s show and revealed some juicy details about their rumored nuptials.

They basically ascended the corporate ladder together. Aik Nayee Cindrella, Aunn Zara, Diyar-e-Dil, and Sanam are some of the most popular dramas. The stars have blessed us with several fantastic ventures. And we’re waiting for them to sign up for a new project with bated breath.

They’ve been friends for a long time, yet their love and bond are as new as a daisy. We frequently see them together, and they are always there for each other at award presentations and gatherings. Fans sometimes wish for them to marry because they make such a great couple. And rumour mongers took advantage of the situation to propagate false information about their connection.

The duo recently performed at GMP’s ‘Shan-e-Suhoor.’ They also discussed their marriage rumors during the lighthearted banter and some fascinating insights into their lives and projects. According to the star of Pehli Si Muhabbat,

“I was on the set of a drama series when my mother contacted me in a hurry and said, ‘You were married to a guy named Osman and you didn’t even tell me about him,'” she added.

The star of Ehd-e-Waha also revealed,

“On our Wikipedia page, someone wrote that we are married with two children.”

The star of Man Mayal spills the beans about their viral wedding photographs. “She said,” she explained.

Even strangers began to congratulate us.”