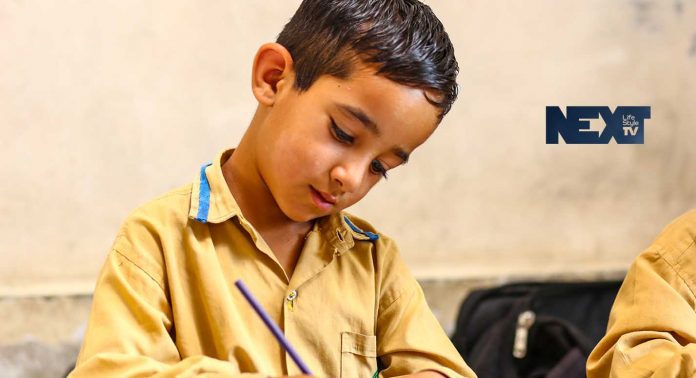 [Karachi, Pakistan]: In a kindergarten classroom in Islamkot, a tehsil (township) in the Tharparkar Desert in Sindh, a child named Mehtab eagerly writes his name in English on the blackboard. He does a perfect job – carefully forming each letter of his name and then reading it loudly. However, it is not until the research team rubs off the last two letters of his name and asks him to read, that he gives them a blank stare.

Mehtab has rote learned his name, just as he is expected to rote memorize his textbooks.

This meaningless memorization of information happens in classrooms across Pakistan, where children’s language and cultural context is not taken into consideration. It has led to a crisis – one where children who regularly attend school can’t read or write a simple sentence in any language albeit being in school for several years.

In an attempt to address this issue, The Citizens Foundation (TCF) and the Thar Foundation have published a research report called “Finding Identity, Equity, and Economic Strength by Teaching in Languages Children Understand.”

This research report proposes how Pakistan, which has over 70 native languages, and countries with similar challenges across the world can incorporate ‘mother tongue based multilingual education’ into their education systems. The term “Mother tongue” refers to the language that children first learn at home and have a good understanding of when they first come to school. “Multilingual” refers to the expectation that children will learn several languages during their education – in Pakistan, these are regional languages like Sindhi and Pashto as well as Urdu and English.

The report reflects three years of work in Tharparkar, Pakistan, interviews with over 130 practitioners, policymakers, and academics worldwide, and cataloguing of language policies in similarly diverse countries. It adds to the literature on MTB MLE by solving for contexts where there are many mother tongue languages and where children are expected to learn up to four languages, including English, by the end of secondary school.

“If you walk into a TCF school, you’ll notice that children are confident – they are bright-eyed, engaged with teachers and the lessons in their textbooks. They will tell you what they think, even before you ask. This is because TCF has encouraged the use of Urdu and familiar languages in its schools since inception. Children express themselves well if they are allowed to use a familiar language. Conversely, they face difficulties when forced to use a foreign language, like English – a language they hardly hear or use outside of school. We are grateful to the Thar Foundation for supporting us in this significant research project.”

In early 2020, both TCF and Thar Foundation schools implemented this research-based MTB MLE model in 21+ classrooms in Tharparkar, starting with pre-kindergarten and kindergarten. Students in these classrooms will transition through fluency in three or four languages over the course of their education: from diverse mother tongue languages (Dhatki and Sindhi) to the regional language (Sindhi), then the national language (Urdu), and then to an international language (English). All higher education in Pakistan is in English, making English a necessity.

Syed Abul Fazal Rizvi, CEO of the Thar Foundation shared, “Thar Foundation is striving to impart quality education in Tharparkar through our 27 school units since past 3 years now. It was the community feedback that motivated us to initiate three-languages learning model in our schools. Thar Foundation and TCF jointly took this initiative, wherein the Thar Foundation funded the 3-year project. We are extremely delighted that students of Thar will now learn in Sindhi/Dhatki at early grades, subsequently adding Urdu and English. TCF has plans to extend this model to all its schools in Sindh which will be a shared pride for us.”

Unlike a lot of research that precedes this study, TCF does not just insist on mother tongue based approach to education. Instead, it provides pragmatic recommendations for how Pakistan, and countries like it, can provide mother tongue based education in contexts where there are many languages and where children are expected to learn up to four languages, including English, by the end of secondary school.

About The Citizens Foundation (TCF):

TCF is a non-profit organization set up in 1995 by a group of citizens to bring about positive social change through education. 25 years later, TCF is now one of Pakistan’s leading organizations in the field of education for the less privileged, educating 266,000 students across 1,652 schools in Pakistan. The TCF model focuses on providing quality education through purpose-built schools located in the heart of Pakistan’s urban slums and rural communities. The organization ensures that girls represent nearly 50% of overall student enrolment. To magnify its impact, improve enrolment and quality of education, TCF also adopts Government schools across Pakistan.