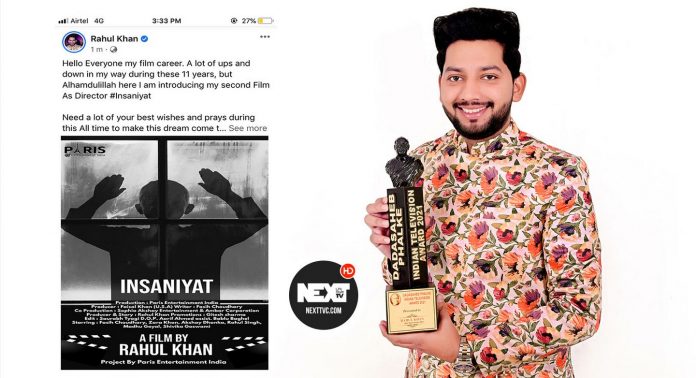 acclaimed critical success of the film Beti Hindustan Ki, director Rahul Khan is all set to go on floors with his next film. Rahul Khan has previously made his name in the television industry with superhit TV shows such as Porus, Mahakali – Anth Hi Aarambh Hai, and others.

Much as the title of his upcoming film Insaniyat, the story too is beautiful and heart-wrenching. The story revolves around a family struggling to make the ends meet in their daily life, and yet they continue to help & support others. During the difficult times of covid how this family stood by their values and kept on fighting the battle in their everyday life.
The story is an amalgamation of values, principles, and emotions that we still see in Indians. What happens to the family, in the end, is what we will witness through the lens of Rahul Khan.

The major part of the film has been shot in Delhi near Jamah Masjid and the remaining bit will be shot in UP keeping the medical team in place and following the rules of post covid work enforcement.
The film features Fasih Choudhury, Rahul Singh, Madhu Goyal, Akshay Dhanka and Zara Khan, Shivika Goswami being directed by Rahul Khan the film is being produced by Faisal Khan & Paris Entertainment India. The story has been written by Fasih Choudhary.

Director Rahul Khan won the Dada Saheb Phalke Indian Television Award 2021 for his first solo film Beti Hindustan Ki and the next film is very close to him as he has met such families who were in similar situations and yet never gave up on helping the community.