The Unsung Warrior will be releasing on 10th January 2020.We are in the final leg of the year which means it is time for some of the most awaited films and movie trailers to come out. Bollywood has become growingly obsessed with its December releases given the major market it provides given the holiday season. Another formula which seems to be working for Bollywood is period drama. Sanjay Leela Bhansali for the longest held the roots of inching the perfect period drama. Be it Bajirao Mastani or Padmaavat, SLB took the World by storm.

Earlier today was the trailer launch of one of the most awaited films of the year, Tanhaji – The Unsung Warrior. The film stars Ajay Devgan, Saif Ali Khan and Kajol in leading roles. The Nawab of Bollywood, Saif Ali Khan was present at the trailer launch of the film and literally swept us off our feet. In true royal style, Saif donned a well tailored grey suit with a crisp white button down with black shoes, black wayfarers and perfectly groomed hair and beard. We are absolutely in awe of his entire look. For starters we love that he picked such a classy and understated colour which he amazingly balanced with a white button down. The entire monochromatic look along with the black shoes are working really well and we love it. Tanhaji – The Unsung Warrior will be releasing on 10th January 2020. 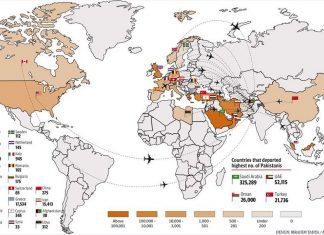 Sajjad Ahmed - October 19, 2019 0
Globally, immigration has emerged as the most prominent wedge issue. And in a bid to please nationalistic voters at home, governments around the world...