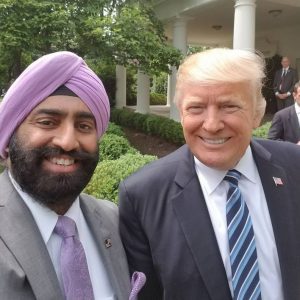 Expressing deep sympathy for the affected family and African American community across the nation, Jasdip Singh Jesse, the founding Chair of Sikhs of America called for appropriate action against racism, injustice, and discriminatory behavior and asked for maintenance of communal and racial harmony across the nation.

“We are deeply troubled by this senseless loss of life at the hands of police officers and extend our deepest condolences to family and friends of the deceased,” said Jesse, adding, “ We stand ready to help the African American community and others in this hour of need and mourning.”

Without mincing words, Jesse lambasted the “thugs and opportunists who, in the guise of protestors are wreaking havoc on small and big businesses with indiscriminate looting.”

Jesse cautioned those indulging in such antisocial acts that attacking good police officers and damaging properties will boomerang on them as this weakens the social fabric of American society. Jesse strongly endorsed the tough language used by US President Donald Trump to deal with such miscreants.

Jesse said, “Those are nothing but petty criminals, crossing state lines and indulging in looting, thus affecting an already fragile economy, suffering due to the Coronavirus.”

Echoing Jesse’s sentiments, Soni, President of Sikhs of America said: “Some of the rogue elements in the police force are giving a bad name to the hardworking law enforcement officers who do their jobs with unflinching dedication, which always inspires unsullied faith from the law-abiding citizens.”

There is great hope for America when police officers are joining the marches for justice. https://t.co/swDKdSMRwD

Sikhs of America believes in the rule of law and welcomes an appropriate judicial course of action by the authorities.