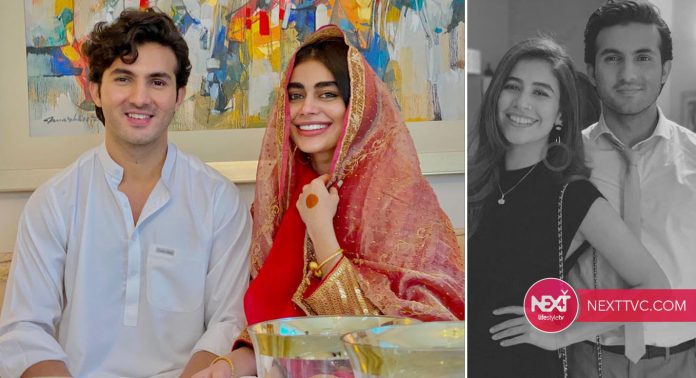 Pakistani actors Sadaf Kanwal and Shahroz Sabzwari tied the knot, months after rumors of their relationship had been rife on social media.

These pictures of the happy couple after their nikkah ceremony show that they are really happy together irrespective of what people are saying about them. Sadaf is definitely not the kind of person who is concerned about other people’s opinion and Shahroz also chose to follow his heart’s desire.

Photos of the couple’s nikkah ceremony had been circulating on social media, and the news was confirmed after the model changed her name on Instagram from Sadaf Kanwal to Sadaf Sabzwari and also posted pictures from the intimate ceremony.

Shahroz too announced the marriage for his fans and followers on Instagram, as he posted pictures with the caption, “Alhamdulilah.”

Shahroz had parted ways with his wife of seven years, Syra Yousaf this year in February over “irreconcilable differences”. The former couple is parents to a daughter named Nooreh.

The news of Syra and Shahroz’s separation broke the internet a few months ago and many reliable media resources shared the news that the reason behind their separation is the relationship of Shahroz Sabzwari and Sadaf Kanwal, of course, both the parties denied the news Sadaf wrote long long passages denying the news, Shahroz Sabzwari shared a video message and said that he has nothing to do with Sadaf she is just his friend. Later on, Shahroz and Syra got divorced.

Here we have the Shahroz Sabzwari’s video message: