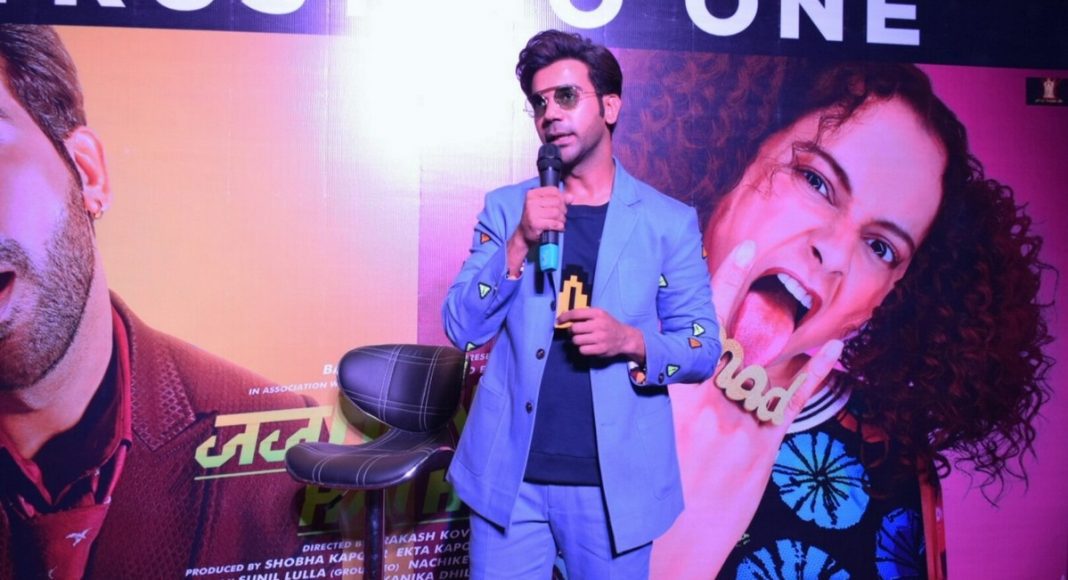 Today, The most talented and versatile actor Rajkumar Rao launched the trailer of the movie Judgemental Hai Kya. The movie starrer Rajkumar Rao and Kangana Ranaut in prominent roles. Launch of the trailer took place in PVR Chanakyapuri, New Delhi. The movie will be released on 26th July 2019. Directed by Prakash Kovelamudi and produced by Ekta Kapur, Shobha Kapoor AND Shailesh R. Singh jointly the film casts Kangana Ranaut in the lead role. Also, Satish Kaushik, Jimmy Shergill, Amyra Dastur, Mimoh Chakraborty and Hrishitaa Bhatt will be seen in crucial roles. The movie is scheduled to release on 26th July 2019.

Present at the event, Rajkumar Rao was asked about his working experience with Kangana to which he replied, ” I was very excited. Kangana is a great actor and whenever you work with a good actor it reflects in your performance. It’s always fun working with Kangana.” Responding to a question about the trailer of the movie, Rao came up with a filmy reply, “This was just the trailer, picture abhi baaki hai!”

Going with the flow of the hashtag trend, the team of “Judgemental Hai Kya” had started the tag #TrustNoOne which has definitely made people guessing the plot of the movie already. Rajkumar further shared about the film saying, “It’s an entertaining thriller. Both the characters are suspecting the other one to be guilty and how they’re a little different from each other’s perspective. Both are accusing one another to admit and they’re trying to prove it. How Kanika (Screenplay writer) has written these characters is very entertaining in itself”.

Web Desk - April 8, 2021
On April 22 and 23" 40 nations will gather together via video conference to talk about how climate change is affecting the world. A very...