Piyush Goyal met with a delegation from Sikhs of America, Inc., which advocates for the Sikh community globally. 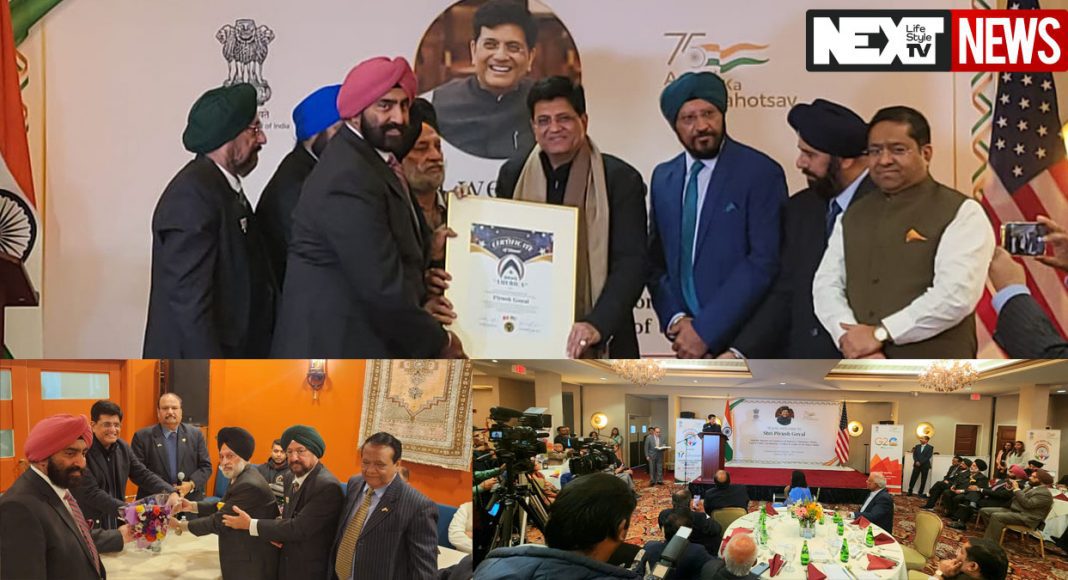 New Jersey [US] [NEXTNEWS]: Union Minister of Commerce Piyush Goyal is now in the United States. He has highlighted the India narrative and Prime Minister Narendra Modi’s leadership and called on the Indian diaspora to help increase India’s presence in international markets.

Indian Consul General Randhir Jaishwal welcomed Mr. Piyush Goyal after a cultural presentation with Indian song and dance was delivered at this event.

A delegation from Sikhs of America, Inc., an organization that works to advocate the Sikh community’s interests on a global scale, personally met with Piyush Goyal, the Union Minister of Commerce. They show their gratitude by presenting Narendra Modi, the Prime Minister of India, with a letter of appreciation. In a letter that was signed by Jasdip Singh Jesse (Chairman), Kamaljit Singh Soni (President), Baljinder Singh Shami (Vice President), Hardip Singh Goldi (President, New Jersey Chapter), Sukhpal Singh Dhanva (Media Director), Gurwinder Singh Sethi (Director), and Ratan Singh, they expressed their gratitude to the Government of India for commemorating the Martyrdom Day of Sahibzada in India and around the world.

Piyush Goyal received the letter and said he would deliver it to Prime Minister Narendra Modi.

Goyal praised Prime Minister Modi’s management style during his talk at Edison, praising his visionary goals, risk-taking policies, and meticulous oversight. He was impressed by how much the United States had benefited from Indian expertise.

Goyal, who is on a four-day visit to New York, New Jersey, and Washington, DC, met with members of the Indian community and discussed the government’s efforts to win over this prominent and prosperous part of the American economic life in the hopes that they will invest in India. The minister said he was interested in hearing India’s growth tale from Indian speakers.

Goyal, speaking to the Indian diaspora, stated, “I would encourage you to assist us in building the outlines of a new India, a powerful India, and India that will lead global growth and India that is destined to be a ‘Vishwaguru.'”

As we advance 25 years, “when we take up the G-20 leadership this year, we are showcasing to the world our ability and accomplishments,” said Goyal.

“I will make sure that every one of you contributes to the ideas and efforts being made during the Azadi ka Amrit Mahotsav when we reflect on our accomplishments and glory and pictures for this Kaal. Everyone in your family and your business stands to benefit significantly from your move to India.”To quote Goyal:

He said that trade complementarities, long-standing strategic and economic linkages, and robust people-to-people interaction make India and the United States natural partners. The minister for the Union also remarked on how both countries are healthy democracies.

“The United States of America and the Republic of India are flourishing democracies. We share deep friendship connections, solid geopolitical links, and extensive commercial and trade interests in each other’s nations’ prosperity, “Goyal continued.

Goyal praised the Indian economy and its recovery from the Covid shutdown, noting that 2022 was a record trade year, with exports increasing to USD 670 billion.

Goyal is in the United States to participate in the 13th Trade Policy Forum (TPF) ministerial meeting, a primary bilateral mechanism on trade, with US Trade Representative Katherine Tai. The top Indian official is also scheduled to call on US Secretary of Commerce Gina Raimondo.

Share
Facebook
Twitter
WhatsApp
Email
Copy URL
Previous article
Sikhs of America, Inc. established chapters in New York and New Jersey.
Next article
Wow, this is a great age to be alive. The year 2023 has been declared the year of local music in Pakistan, and the people are ecstatic.
- Advertisement -