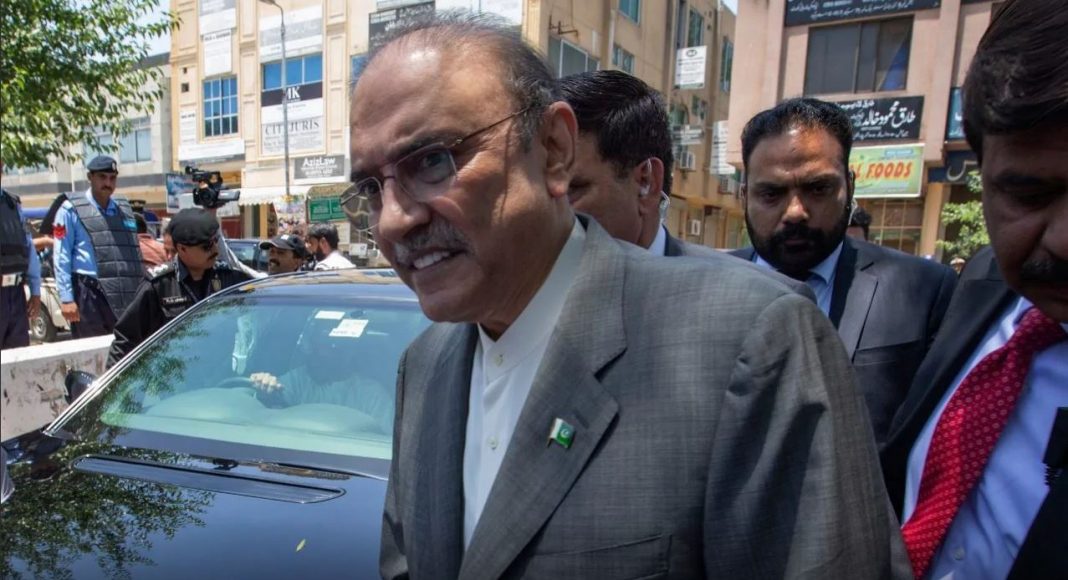 Former president Asif Ali Zardari was arrested by the National Accountability Bureau (NAB) on Monday hours after the Islamabad High Court (IHC) recalled the pre-arrest bail granted to him and his sister Faryal Talpur in the fake accounts case.Zardari, the co-chairman of the Pakistan Peoples Party (PPP), was taken into NAB custody from his residence in the federal capital in the afternoon. He has been taken to the NAB Rawalpindi office and would be presented before the accountability court on Tuesday (today).

During the course of the proceedings in the IHC, a two-member bench, comprising Justice Aamir Farooq and Justice Mohsin Akhtar Kayani, rejected the petitions seeking extension in interim bail of Zardari and Talpur.

However, NAB has not arrested Talpur because there were no arrest warrants against her.NAB Additional Prosecutor General Jahanzeb Bharwana pleaded that it was a matter related to the transaction of Rs4.5 billion. The NAB was fully authorized to arrest any accused for investigation purpose in light of the Supreme Court orders.

Requesting the court to dismiss the bail petitions of accused, he said that investigation into 28 other fake accounts was still under process. He added that transactions of billions of rupees were done by accounts of A-One International and Umair Associates with Zardari Group and other companies.Referring to Talat Ishaq case, Bharwana argued that the top court had authorised NAB to arrest the accused. Justice Farooq pointed out that those powers were given in a matter related to post-arrest bails.

NAB prosecutor said the accused could only file pre-arrest bail plea in hardship and extraordinary situations but the former president and his sister had not mentioned any such situation in their bail pleas.Zardari’s counsel Farooq H Naek argued that his client was not accused of assisting in opening of fake bank accounts.

He added that NAB chairman was not authorised to issue arrest warrant, adding that it could only be issued during inquiry and investigation process.He said that the NAB chairman had issued arrest warrants against his client after filing an interim reference before accountability court. The trial court had not even provided charge sheet to the accused persons, he continued, only the trial court could issue arrest warrants at this stage.Later, the court rejected the petitions of Zardari and Talpur. “For the reasons to be recorded later, instant petition is dismissed and ad-interim bail granted to the petitioner vide order dated 28.03.2019, is recalled,” said the IHC order in the case of Zardari.

“After dismissal of bail petition by the Hon’able Islamabad High Court, Islamabad and in pursuance of warrant of arrest issued by worthy Chairman NAB, this Bureau is going to execute the said warrant of arrest of accused Asif Ali Zardari S/o Hakim Ali Zardari,” the letter read.At the time of arrest, there were reports of scuffles between the PPP supporters and the police. Senior party leader Qamar Zaman Kaira had to intervene to keep them separated. Later, Zardari’s aide Mustafa Nawaz Khokhar appeared at the gate of house and let the NAB team in.

There was heavy presence of the security forces at Zardari’s residence. The roads leading to and from the Zardari House were sealed. The PPP supporters raised vociferous slogans when Zardari was driven away in a bullet-proof vehicle.Zardari is lodged in a special room prepared for him in the NAB Rawalpindi office.

Keeping in view the medical condition of the former president, his personal servant has been allowed to provide him the necessary medicines.NAB has formed a team of investigators for the probe into the fake accounts case. The team will seek remand of the former president from the accountability court on Tuesday (today) and investigate him. NAB has arranged for a medical board of the Polyclinic for the medical examination of Zardari

Speaking after the IHC verdict, PPP Chairman Bilawal Bhutto Zardari appealed his supporters to remain peaceful. He added that they were waiting for IHC’s written order after which the future strategy would be decided.

Meanwhile, reacting to the arrest of his father, PPP Chairman Bilawal Bhutto Zardari demanded resignations of the National Assembly speaker and deputy speaker for not allowing him to speak on the matter on Monday.

“I was not allowed to speak in two consecutive sessions of the lower house of parliament,” said the PPP chairman in a news conference called following today’s developments.

“I condemn the conduct and behaviour of the speaker and deputy speaker and I demand their resignations. Both of them take dictation from the ruling party and their ministers.”

He appealed the party’s die-hard supporters to remain calm. “We are waiting for the IHC’s written order, and chalk out future strategy accordingly.”

Reacting strongly to Zardari’s arrest, Pakistan Muslim League-Nawaz (PML-N) Vice-President Maryam Nawaz said the ‘fake prime minister’ would not be able to sidestep accountability by arresting his political rivals.Taking to micro-blogging website Twitter, Maryam said separate laws prevailed for the masses and those in power. “Fake prime minister [Imran Khan] used to say there were separate laws for the rich and poor in Pakistan, but the fact is that there is one law for the rich and poor and other for the fake PM and his investors,” she remarked.

Maryam, whose father and three-time prime minister of the country Nawaz Sharif is also currently languishing in jail, further added that the ‘fake premier’ would have been facing courts for allegedly stealing the public mandate and corruption of his sister if the law and accountability process was equal for everyone in the country.Meanwhile, Zardari’s youngest daughter Aseefa Bhutto also fired broadside at the government, saying, “This cowardly selected government thinks throwing opposition into jail will legitimise it. No case, no conviction, no plausible cause. Arresting Asif Ali Zardari will not silence the voice of truth. He was vindicated before and he will be vindicated again.”

She also cast doubts over federal ministers’ knowledge of today’s development days and months before the court’s decision. The daughter of former premier Benazir Bhutto also questioned issuance of arrest warrants before cancellation of bail. “Mockery of justice,” she added.Pakistan Muslim League-Nawaz (PML-N) President Shehbaz Sharif lamented on Monday the issue of arrest warrant of Pakistan Peoples Party (PPP) co-chairperson Asif Ali Zardari, demanding that production order be issued for the former president, who was taken into custody earlier in the day.

“Asif Ali Zardari cooperated with the NAB [National Accountability Bureau] and did not use any delaying tactic,” Shehbaz said in his address in the National Assembly.

He said that the anti-corruption watchdog should have appreciated Zardari’s conduct instead of “issuing arrest warrant”.Meanwhile, a number of PPP workers in Lahore protested against the IHC decision at Gulab Devi Chowk, Ferozepur Road and Garhi Shahu. They blocked the Metro Bus track, burnt tyres and chanted slogans against the government.The PPP Karachi division asked party leaders and workers to show up at the Karachi Press Club in the evening to protest what it called the “oppressive machinations of this selected incapable government”. It termed the court decision a part of the government’s alleged policy of “political victimisation in the name of accountability”.

The cases against Zardari are part of the investigations being conducted by NAB in pursuance of the Supreme Court’s verdict in the money laundering of billions through fake accounts case wherein it was forwarded a joint investigation team (JIT) report.Other suspects in the investigation include Omni Group’s Anwar Majeed and his son Abdul Ghani Majeed, former Pakistan Stock Exchange chairperson Hussain Lawai and Summit Bank Senior Vice-President Taha Raza.

Sajjad Ahmed - January 20, 2021
Earlier, Democrat Joe Biden was sworn in as president of the United States, assuming the helm of a country reeling from deep political divides,...