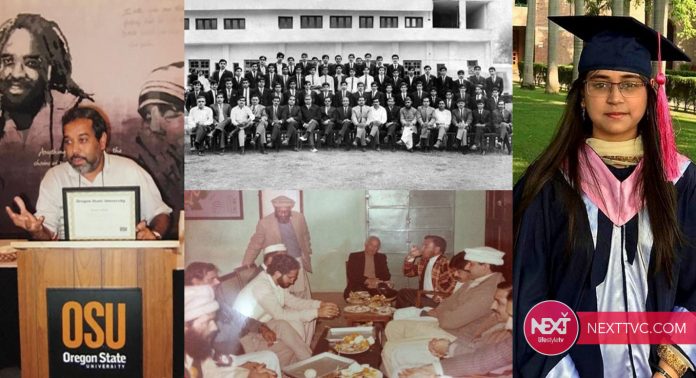 Peshawar is known for its rich and ancient cultural, historical, and academic background, having the oldest Buddhist University on the site of the University of Peshawar in 2500 BC (approx.). It was once known as a hub of academia, having libraries in every corner. The people of Peshawar, besides being generously hospitable, were and still are known as progressive intellectuals and voracious readers. Among a few families of academic renown from minorities, hailing from Peshawar, Edwin’s family is one who has dedicated its generations in the true spirit of patriotism by rendering meritorious services in the field of education.

Late Mr. & Mrs. Edwin (seniors) were educationists who were affiliated with the Federal Government colleges and Elizabeth Girls High School – the first school for females (1905) in the province of Khyber Pakhtunkhwa (formerly known as NWFP). Edwins, thus, have the honor of being among the pioneers of female education in the province of Khyber Pakhtunkhwa. Hundreds of students and their families remember them for their sterling character, honesty, dedication, and intellectual profundity.

Their son, Prof. A. Edwin – after doing Masters in English from the University of Peshawar and specialization in proficiency tests from Leeds University, UK, and Oregon State University, US – served for a long time in various educational institutions in Pakistan and abroad. He cleared the PCS examination but decided to join Government College Peshawar as a lecturer in English. Later, he joined Edwardes College and retired as Chairman of the English Department. His wife, Mrs. R. Edwin has been serving in Elizabeth Girls High School and Edwardes College School (Wing-II) for the past more than thirty years in the capacity of being a Section Head and Vice-Principal. They have one son and two daughters.

The eldest is Dr. Cedric Aimal Edwin, who – after early education from Saint Mary’s School and Edwardes College – went on to do his Ph.D. from the University of Liverpool, UK. He came back and joined Ghulam Ishaq Khan Institute (GIKI), one of the world’s finest academic institutions, and served there as Assistant Professor and Head of Technology Incubation Center for four years. He, then, joined Khyber Pakhtunkhwa Impact Challenge (KPIC) – a project of LUMS and Government of Khyber Pakhtunkhwa. Currently, he is working as Chairman of the Department of Management Sciences at a private university in Peshawar. He actively mentors and coaches managers, directors, entrepreneurs and government officers to improve their work productivity. He has helped over 300 youngsters to develop and launch their innovative business ideas.

The two Edwin daughters are both alumnae of Peshawar Convent. The elder, Myra cleared Federal Public Service Commission (FPSC) examination but decided to serve her alma mater Edwardes College, where she worked for seven years as a lecturer in English, before becoming the first Christian to qualify competitive exams in Khyber Pakhtunkhwa. She is, currently, a civil servant, working as Provincial Management Services (PMS) Officer in the Government of Khyber Pakhtunkhwa, and is also pursuing her Ph.D. in English Literature.

Besides, she volunteers, along with her team of students, teachers, and doctors, in works of humanitarian nature under the banner of “Giving Back to Pakistan”. The youngest is Yamima, a gold medalist in MPhil in English Literature from Forman Christian College (A Chartered University), Lahore, who is currently working as a lecturer in English at one of the top-ranked institutes in Pakistan.

It goes without saying that Edwin family’s sense of commitment to their profession, which they consider more of an avocation, and love for their country have led them to produce many honest and competent Civil Servants, Army Officers, Doctors, Engineers, Scientists, Lawyers, Professors, and Legislators, generally to the entire country and especially to the province of Khyber Pakhtunkhwa. Their services in the field of education are unprecedented.