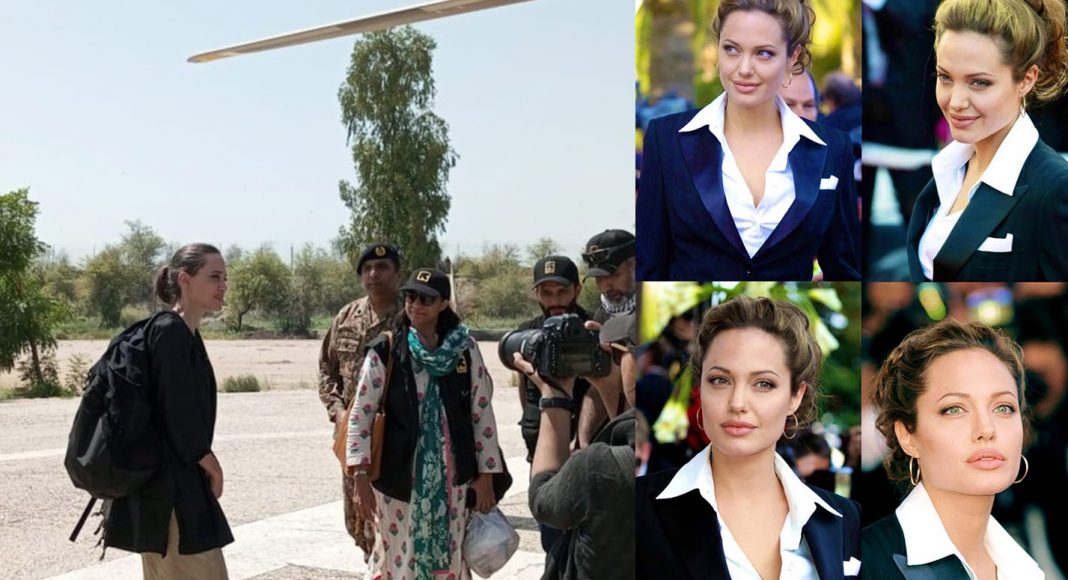 Jolie flew into Dadu via helicopter to help those impacted by the devastating floods.

Hollywood Angelina Jolie, a famous actress who is also a humanitarian, has visited Pakistan to help with the country’s flood relief efforts. The International Rescue Committee (IRC) has confirmed that the star who was wanted has arrived in Dadu to help the people who were hurt by the recent floods.

“Angelina Jolie, an actress and humanitarian, is in Pakistan to help those who have been impacted by the recent flooding. Thirty-three million people have been affected by the widespread flooding and rain that have submerged one-third of the country. ” group cooperation Angelina Jolie is in the area to “witness and gain an understanding of the situation, and to hear from people affected directly about their needs and about steps to prevent such suffering in the future.”

The news source also said, “Jolie, who has helped victims of the 2010 floods in Pakistan and the 2005 earthquake, will visit the IRC’s emergency response operations and local groups that help displaced people, including Afghan refugees.”

More from the report: “The people of Pakistan have hosted Afghan refugees for over forty years, making it the second largest host of refugees worldwide despite contributing only 1% of global carbon emissions.” “Jolie will bring attention to the critical need for immediate aid for the people of Pakistan, as well as for long-term solutions to the worldwide crises of climate change, human displacement, and protracted insecurity.”

The IRC says that Jolie will “see for herself how countries like Pakistan are paying the most for a crisis they didn’t start.”

BREAKING: International humanitarian Angelina Jolie is with the IRC visiting Pakistan to see and hear from people affected by recent floods.

With more rains expected in the coming months, we hope her visit will help the world wake up and take action. https://t.co/Q3qeB7x5Ah

The International Rescue Committee also said that it hopes Jolie’s visit will bring attention to the problem and encourage people around the world to do something, especially in the countries that are responsible for the most carbon emissions in the world.

The climate crisis has caused a lot of damage, so the Turkish actor Celal Al, who plays Abdurrahman Alp in the popular Turkish TV show Diriliş: Erturul, has come to Karachi to help with relief efforts.

In order to convince his Turkish fans to help the displaced people of Pakistan, the actor flew all the way there from Turkey. Al has inspired other celebrities both at home and abroad to help flood victims by partnering with the Turkish Red Crescent.

Sajjad Ahmed - March 4, 2019
Shah Rukh Khan’s last film Zero did not do well at the box office and therefore, he is being extremely cautious with his next...