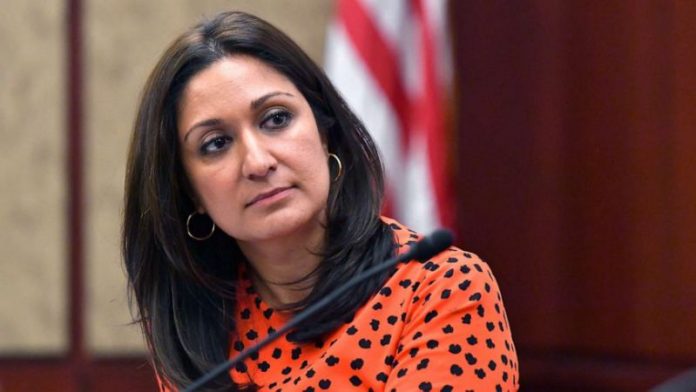 In making the announcement on Nov. 27, jointly with Politico, Sara Just, executive producer of PBS NewsHour, said, “Judy Woodruff has incomparable experience moderating debates and demonstrates her fairness in probing interviews every day on the PBS NewsHour.”

“I’m delighted that she will be joined on the debate stage by such accomplished and evenhanded journalists, including NewsHour’s Amna Nawaz and Yamiche Alcindor,” she added.

Produced in partnership between PBS NewsHour and Politico, the Democratic National Committee-sanctioned debate is also expected to be carried live by CNN.

Nawaz, who joined joined PBS NewsHour in April 2018, besides serving as its senior national correspondent is also its primary substitute anchor.

Prior to joining the NewsHour, Nawaz was an anchor and correspondent at ABC News, anchoring breaking news coverage and leading the network’s digital coverage of the 2016 presidential election. Before that, she served as a foreign correspondent at NBC News, reporting from Pakistan, Afghanistan, Syria, Turkey, and the broader region.

She is also the founder and former managing editor of NBC’s Asian America platform, built to elevate the voices of America’s fastest-growing population. 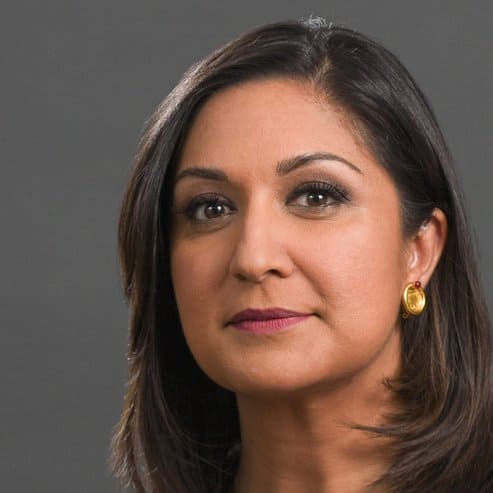 At the NewsHour, Nawaz has reported politics, foreign affairs, education, climate change, culture and sports. Her immigration reporting has taken her to multiple border communities in Texas, New Mexico, Arizona, and Mexico. She’s investigated the impact of the Trump Administration’s immigration policies, including following the journey of a single toddler as she left her home in Mexico, was separated from her family at the U.S. border, and later reunited with her family several weeks later. She also regularly covers issues around detention, refugees and asylum, and migrant children in U.S. government custody.

Domestically, her reporting has taken her to Appalachia to cover healthcare and the economy, the Pacific Northwest to cover gentrification and discrimination in housing, and communities across the country to take the political pulse of the nation. Internationally, she’s traveled to Brazil to report on climate change from within the Amazon, and the Venezuelan refugee crisis.

In 2019, her reporting as part of a NewsHour series on the global plastic problem was the recipient of a Peabody Award.

While at ABC News, Nawaz reported the documentary, “Roberts County: A Year in the Most Pro-Trump Town,” following four families’ lives over President Trump’s first year in office, and hosted the podcast series, “Uncomfortable,” featuring in-depth, one-on-one conversations with thought leaders on the issues dividing America.

She was NBC’s Islamabad Bureau Chief and Correspondent for several years, and was the first foreign journalist allowed inside North Waziristan, the then-global hub of Al Qaida and the Taliban. She covered the Taliban attack on Malala Yousafzai, the U.S. raid on Osama bin Laden’s compound, and broke news in a series of exclusive reports on the impact of U.S. drone strikes. Nawaz reported for the network’s investigative unit, covering the U.S. housing crisis and the British Petroluem(BP) oil spill, and also covered the election and inauguration of Barack Obama, the earthquake in Haiti, and Hurricane Katrina.

Nawaz began her career as a Nightline Fellow at ABC News. When the Sept. 11 attacks happened just weeks into her first job, Nawaz was given the opportunity to work on one of the most important news events in recent times, which set the precedent for the rest of her career.

Nawaz has also been honored with an Emmy Award for the NBC News Special “Inside the Obama White House,” a Society for Features Journalism Award, and was a recipient of the International Reporting Project fellowship in 2009.

She’s an alumna of the University of Pennsylvania–where she earned a bachelor’s degree, majoring in politics, philosophy and economics, and also where she captained the varsity field hockey team—and the London School of Economics—from where she received her master’s degree majoring in comparative politics.

In a South Asian Journalists Association (SAJA) profile in 2014, Nawaz said, “From day one in this industry, I was immersed in a system that held itself to the highest standards, with the chance to learn from some of the most talented, kindest, most dedicated people in the business,” and added that she also “looked to brilliant female journalists, such as Andrea Mitchell, Christiane Amanpour and Martha Raddatz for inspiration.”

“I’m incredibly lucky to have had strong, successful examples of women who were already doing the kind of international reporting I wanted to do,” she said.

In an interview with Jade magazine.com, tracing her genesis into journalism, she recalled, “I thought I might one day be a lawyer (I also loved to argue.) I got a one-year fellowship at ABC News right out of college. I figured I’d apply for law school afterwards.”

“But a few weeks into the job – my first – the 9/11 attacks happened. A lot of things I’d believed to be true – about my faith, about the part of the world I come from, about who I was – were called into question. I found solace, a sense of purpose, in trying to find out the answers. And I saw how important it was to provide that information to others. It’s one of the only jobs I know of where you can actually learn something new every day. I still get such a kick out of that,” she said.

In terms of the effect of her being an Asian American woman on her career, Nawaz said, “Sure, in the parts of the world I’ve covered, there have been a lot of times when I’m the only woman at the protest, or in the briefing room, or on the military embed.”

“I’m certainly not the first woman to be any of those places and was actually really lucky to have the support and encouragement of female journalists before me who’d been there and done that.”

But Nawaz acknowledged, “I’ve had people make assumptions about me – because I’m a woman, because I’m Asian, because my family’s from Pakistan, because I’m Muslim – but I can’t control what others think. All I can do is bring my whole self to this job, to report the stories as I see them, and try to treat others’ stories with the same care and respect I’d want someone to treat mine.”

She is married to Paul Werdel, director, product development at the New York Times, and they live in D.C. with their two young daughters.