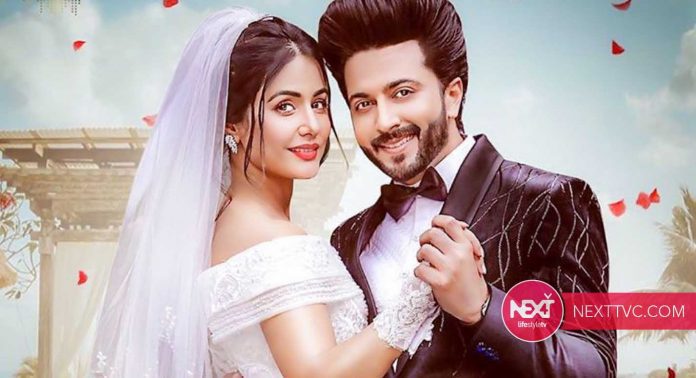 Hina Khan is breaking the internet as she has released the first look of her new project with Dheeraj Dhoopar and duo looks amazing together.

Hina Khan is a true blue social media queen who never fails to take over the internet by a storm with her stunning pictures. However, this time the Yeh Rishta Kya Kehlata Hai actress has been making the headlines for a different reason as shared the poster of her upcoming project. Hina has collaborated with Dheeraj Dhoopar for an upcoming song Humko Tum Mil Gaye and the actress has now shared the first look of the song which is breaking the internet.

The poster featured the Bigg Boss 11 contestant was seen dressed in a bridal look as she wore a white gown with a veil. On the other hand, Dheeraj looked dapper in his black tuxedo. The duo will be romancing each other for the first time and their sizzling chemistry has been winning the millions of hearts. To note, this song which has been helmed by Vishal Mishra, marks Hina and Dheeraj second collaboration after Ekta Kapoor’s Naagin 5. To note, the song will be out on September 15.

Meanwhile, Hina has also been grabbing the attention in her icchadhari naagin role in Naagin 5 wherein Dheeraj plays the role of the lead antagonist. Interestinly, Hina has been sharing the sneak-peek of the song on social media with her fans for quite some time now. However, she didn’t reveal the project that she was working with and now that she has finally revealed, fans are super pumped to see her on screen again. Earlier, Hina was seen with Priyank Sharma in a music video, which was sung by Arijit Singh.