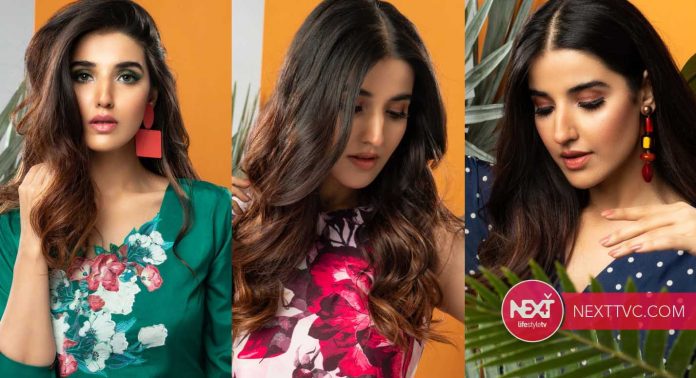 Bringing her own unique flavor to the collection, Hareem was personally involved in the creative and crafting side of the whole process. The collection features three exclusive designs in long and flowy cutlines, summery floral prints and bright colors, “Floral Crush”, “Polka Dance,” and “Tropical Rush”. Each outfit exudes the star’s distinctive persona and speaks for her radiating and bright energy.

“I am really proud of this line,” said the star talking collaboration. “It might sound clichéd- but it had so much fun doing this & I am so glad I got to explore this side of my personality with Lulusar, and I hope everyone loves it as much as I have loved working on it.”

The collection is now available online for purchase on Lulusar’s official website:

Hareem Farooq is a leading Pakistani actress and model who began her career in 2012 with the theatre play “Pawnay 14 August” and “AanganTerha”. She made her big-screen debut with a leading role in the 2013 thriller film “Siyaah” and has been garnering praises ever since. After a successful acting career, the star went on to co-produce “Janaan” in 2016 followed by the 2018 blockbuster “Parchi”, and the recently released “HeerMaan Ja”. She has also starred in famous dramas including “Diyar-e-Dil”, “Main KhayalHoon Kisi AurKa”, “Mere Humdum Mere Dost” and more.