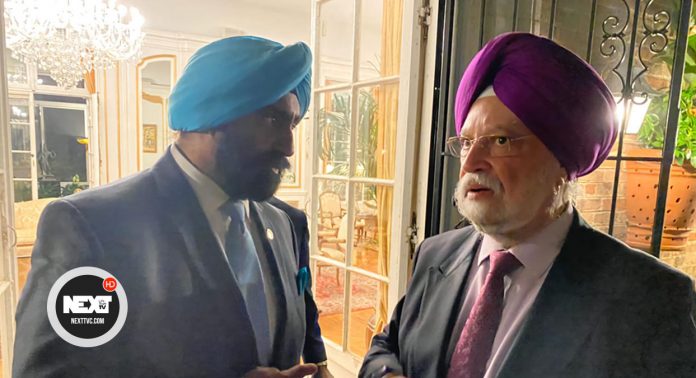 During a reception organized by the Indian Ambassador, Mr. Taranjit Singh Sandhu, an award and recognition were bestowed on the Indian Union Minister, Mr. Hardeep Singh Puri.

There were several well-known Sikh personalities there, including Jasdip Singh Jesse, Chairman of the Sikhs of America, and Darshan Singh Dhaliwal.

A fantastic lunch was held in honor of Hardeep Singh Puri. Prominent journalist Sukhpal Singh Dhanoa, a newscaster, joined the team. The degree of cooperation and understanding between India and the United States has reached a new pinnacle as a direct consequence of the efforts put forward by Taranjit Sandhu, India’s Ambassador to the United States. Some high-ranking government officials from the White House and the Department of State were also present.

It has been claimed that India and the United States have reached an agreement on a trade pact concerning environmentally friendly forms of energy, as stated by Minister Puri. Taranjit Sandhu.

According to Minister Puri, India and the United States have reportedly agreed on a trade accord on green energy.

Hardeep Singh Puri extended his gratitude to the Indian Embassy in Washington, the Indian diaspora, and Ambassador.