Hania Aamir is getting mocked on the Internet for emulating Alia Bhatt’s Gangubai glance. 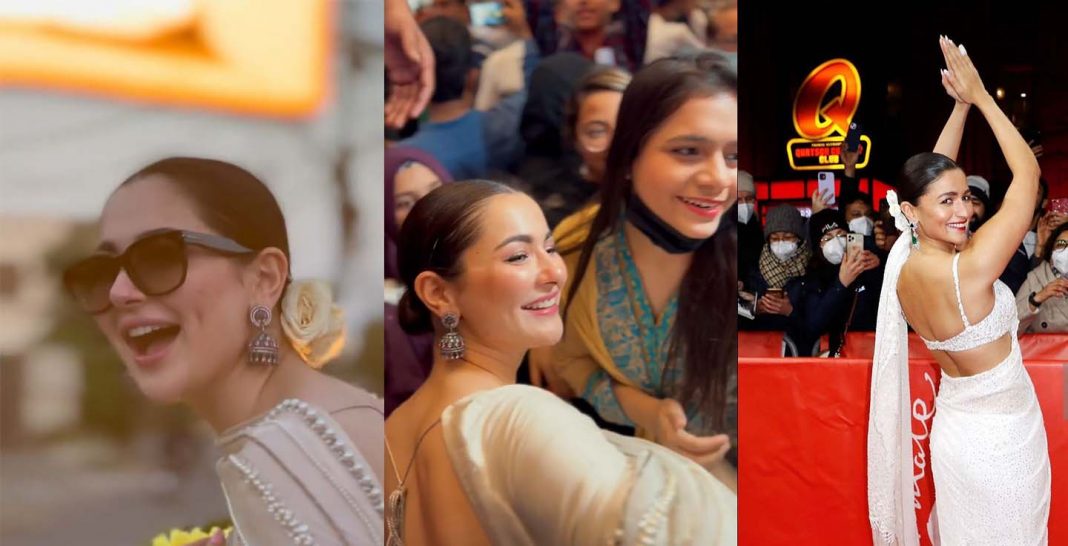 Alia Bhatt is a household name in Bollywood. Ali Bhatt Gangubai Kathiawadi has just launched a new film. This is the first time Alia has been seen on top of a tour van to promote her flick. She’s seen posing for photographs and waving to the crowd.

Parde Mein Rehne Do, an upcoming Pakistani film that will be released on Eid-ul-Fitr, is drawing notice for its similar promotional strategy. In the film’s principal role, Hania Aamir, the actress is ridiculed first and foremost for her daring fashion sense, which the public accuses her of ripping off of Ali Bhatt. Everything is a carbon copy of Gangubai’s advertising, from the bus trip to the clothing worn by Hania.

Alia Bhatt wears a basic white sari with a ponytail and a few flowers in her hair as her outfit choice for the occasion. Similarly, Hania Aamir seems to have taken style cues from Alia Bhatt. When it comes to everything from Hania’s white outfit to her hairstyle, it everything seems like a direct reproduction of the original.

Because of her likeness to Alia Bhatt, the public has labeled Hania Amir a “copycat.” Because the public didn’t appreciate this marketing concept, the replica had also drawn criticism. Hania Aamir and Alia Bhatt are both beautiful actresses.

Share
Facebook
Twitter
WhatsApp
Email
Copy URL
Previous article
A Murder Mystery Is Being Revealed In The New “Chakkar” Trailer
Next article
The Trailer for Heropanti 2 Has Been Released! A collaboration between Tiger Shroff and Nawazuddin Siddiqui
- Advertisement -