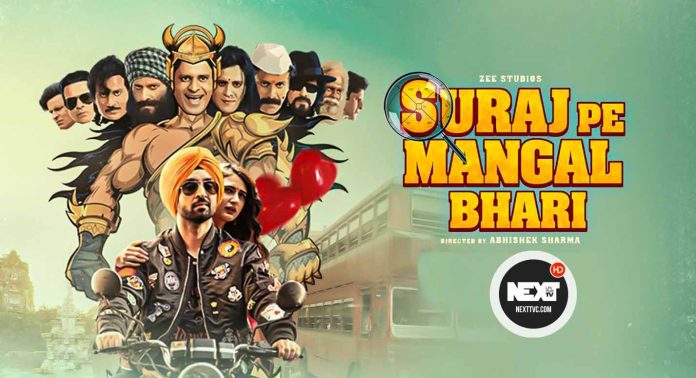 SURAJ PE MANGAL BHARI starts off on a fine note. The entry of Mangal is hilarious and it neatly explains the dedication towards his work. The film drops a bit when Suraj turns into a ‘bad boy’ and when he gets into detective mode. But it picks up once Suraj starts wooing Tulshi. The twist in Tulshi’s tale is unexpected and gives a nice touch. Post-interval, the patch-up between Suraj and Tulshi happens rather quickly. But the fun continues as Mangal uses a new trick to get back at Suraj. More twists take place in the narrative as new characters get introduced. The finale is predictable but hilarious.

Manoj Bajpayee is energetic and is sure to be loved. One rarely gets to see him in such roles and it’s a pleasure how he puts his best foot forward. Surely, this is one of his most memorable performances! Diljit Dosanjh is as always in his element. He suits the part to the T. Fatima Sana Shaikh is quite good in some scenes. But in a few sequences, her expressions are a bit off. This is especially in the scene where Mangal finds out the truth about her. Annu Kapoor (Shantaram Kaka) is impressive and one wishes he had a longer role. Supriya Pilgaonkar (Rekha Rane) is great and contributes to the humour. Manuj Sharma is nice as Diljit’s sidekick. Manoj Pahwa and Seema Pahwa and Neeraj Sood are alright. Vanshika Sharma is funny. Neha Pendse (Kavya Godbole) is beautiful and has a crucial part in which she does very well. Vijay Raaz (Chinmay Godbole) is arguably the funniest part about the film. Sadly, he’s hardly there and on top of that, his character is not utilized well. Rohan Shankar (Ashok) leaves a mark. Vivek R Puranik (Ashok’s father), Harsha Gupte (Ashok’s mother) and Anjali Ujawane (Vatsavitri Lady) are fine. Abhishek Banerjee (Dinesh) is okay in the cameo. Karishma Tanna is sizzling in the special number.

Anshuman Mahaley’s cinematography is first-rate. Rajat Poddar’s production design is authentic and reminds one of the 90s. Vijay Ganguly’s choreography is appealing in ‘Basanti’.  Jia Bhagia and Mallika Chauhan’s costumes are realistic for all the characters. Fatema’s clothes however don’t seem to be of 1995 but nevertheless, looks glamorous. Rameshwar Bhagat’s editing is fair.

On the whole, SURAJ PE MANGAL BHARI is a decent entertainer and a clean family film that works because of its plot, the depiction of the mid-90s era and the performances.