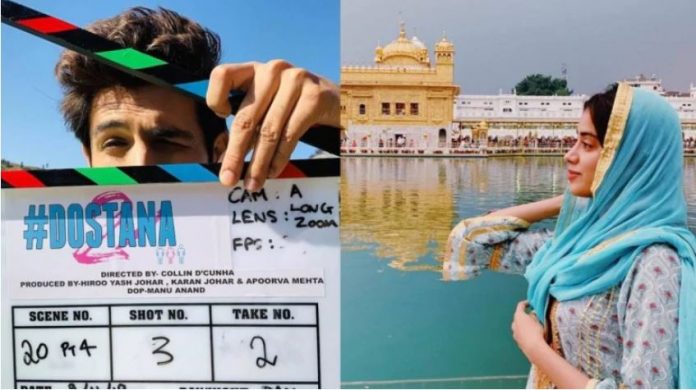 The Delhi schedule of Dostana 2, starring Janhvi Kapoor and Kartik Aaryan, has been postponed due to pollution. The shooting of the film commenced in Chandigarh a few days ago.

Kartik Aaryan and Janhvi Kapoor, who are currently shooting for Dostana 2 in Chandigarh will not be coming to Delhi for its shoot. According to a news report in an entertainment website, the Delhi schedule of the film has been called off due to pollution in the capital. The film also features TV star Lakshya in the lead role.

According to the report, the crew couldn’t brathe in Delhi air and therefore the shoot was cancelled. Sources close to the development told Bollywood Hungama, “The cast and crew couldn’t breathe. Visibility was so low that the camera couldn’t capture the shots properly. It was a no-win situation. The team decided to disperse until the weather improves.”

Meanwhile, Priyanka Chopra is shooting for The White Tiger with Rajkummar Rao in the capital despite bad weather. She took to Instagram to express her concern over the pollution in her city last week. Sharing a picture of herself with pollution mask, she wrote, “Shoot days for #thewhitetiger. It’s so hard to shoot here right now that I can’t even imagine what it must be like to live here under these conditions. We r blessed with air purifiers and masks. Pray for the homeless.

Coming back to Dostana 2, the cast and crew of the film was shooting in Chandigarh. Ahead of the shoot, Janhvi Kapoor visited Golden Temple in Amritsar. She took to social media to share her pictures with her director Collin D’Cunha. The actress and director also relished Amritsar’s popular lassi during their visit.

Kartik Aaryan also took to Instagram to announce the commencement of shooting of Dostana 2. Sharing a picture of hismelf with the clapperboard, he wrote, “#Dostana2 Begins!!”

He shared another photograph wih Karan Johar, who is producing the film. In the photo, Kartik is seen taking Karan’s blessing before kick-starting Dostana 2 shoot. He wrote, “Maa da laadla #Chandigarh nikal gaya
#Dostana2 !! The Dharma rivaaz that all actors need to follow before starting a Dharma film @karanjohar (sic).”