Follow the story of two cousins, Dolly (played by Konkona Sen Sharma) and Kajal (played by Bhumi Pednekar), as they navigate through the twists and turns life throws at them in this journey to find their place in the world. Directed by Alankrita Shrivastava, this story introduces us to Dolly, a middle-class working woman with a seemingly perfect family and to her cousin Kajal, yet another girl who has come to the city with the dreams of making something of her life. Will Dolly be able to keep-up with the pressures of maintaining a picture-perfect life? Will Kajal be able to cross the hurdles her new life, as an independent woman, comes with? To find out, watch Dolly Kitty Aur Woh Chamakte Sitare on 18th of September, only on Netflix! This film promises a plethora of emotions that make you laugh, cry, dance and sing along while on this journey with Dolly and Kajal. Starring: Konkona Sen Sharma, Bhumi Pednekar, Amol Parashar, Kubbra Sait, Vikrant Massey, Karan Kundra and Mushtaq Khan.

Director Alankrita Srivastava didn’t create waves with her directorial debut TURNING 30 [2011]. But her second film LIPSTICK UNDER MY BURKHA [2017] got worldwide recognition and also succeeded well at the Indian box office. That an attempt was made by the Censors to make reckless cuts in this ‘lady oriented’ film also caught people’s attention. And now the talented writer-director is back with DOLLY KITTY AUR WOH CHAMAKTE SITARE. It has a stellar star cast and the trailer indicates that it’s in the same zone as LIPSTICK UNDER MY BURKHA. So does DOLLY KITTY AUR WOH CHAMAKTE SITARE manage to entertain and engage? Or does it fail to entice? Let’s analyse.

DOLLY KITTY AUR WOH CHAMAKTE SITARE is the story of two cousin sisters trying to survive in an emerging city. Radha aka Dolly (Konkona Sensharma) is married to Amit (Aamir Bashir) and has two kids – Pappu (Kalp Singh) and Bharat (Hearty Singh). Dolly and Amit have invested in a flat in an under-construction building and can’t wait to shift into their new house. However, they are falling short of money and Dolly manages to arrange it from her office bank account through unscrupulous means. Her cousin sister, Kaajal (Bhumi Pednekar) moves in with them after she runs away from her family home in Darbhanga to avoid marriage.

After being unsuccessful in finding a decent job, Dolly has no choice but to get employment in a Friendship club’s call centre. Here, she is rechristened as Kitty. She also moves out of Dolly’s house after Amit touches her inappropriately. In the PG, she befriends Shazia (Kubbra Sait) and begins to hang out with her and her boyfriend, DJ Teja (Karan Kundrra). At her workplace, she comes across Pradeep (Vikrant Massey) and she falls for him. Dolly meanwhile is unsatisfied with her sex life and she gets attracted to Osman Ansari (Amol Parashar), a young delivery boy. What happens next forms the rest of the film.

Alankrita Srivastava’s story is decent. The attempt to make a comment on patriarchy and the ills existing in our society is praiseworthy. But Alankrita Srivastava’s screenplay doesn’t do justice to the plot. There’s no proper flow to the writing and things happen in the film at random. Also, there are far too many subplots and not at all of them impress. Also, a few plot points don’t have a logical conclusion, especially the one about Dolly’s dream flat. Alankrita Srivastava’s dialogues are sharp and to the point.

Alankrita Srivastava’s direction is average. She was in a far better form in LIPSTICK UNDER MY BURKHA, possibly also because she was equipped with a far better script. In DOLLY KITTY AUR WOH CHAMAKTE SITARE, the script is not watertight, with only a few scenes really making the impact.

Moreover, the biggest problem with the film is that Alankrita tries too hard to make the film as scandalous as possible. Almost everyone in the film is having a wild life – Dolly is fantasizing about a young boy and stealing money from office for her dream flat, her mother (Neelima Azeem) had left her husband to be with her lover, Kitty is selling romance for a living, Shazia is having short-term relationships while Dolly’s work colleague Juhi (Pavleen Gujral) doubles up as an escort.

Moreover, Dolly’s son Pappu is a cross dresser. Amit and Pradeep, meanwhile, also have their share of dark secrets. The attempt here is to not judge or be regressive. But when almost all the characters in the film are having a scandalous double life, it becomes too much to digest. And not to forget, there’s also a political angle and that further makes things unconvincing. 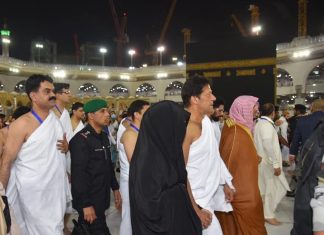 Sajjad Ahmed - May 31, 2019 0
Prime Minister Imran Khan performed Umrah while on a visit to Saudi Arabia for the 14th Summit of Organisation of Islamic Cooperation (OIC), reported...