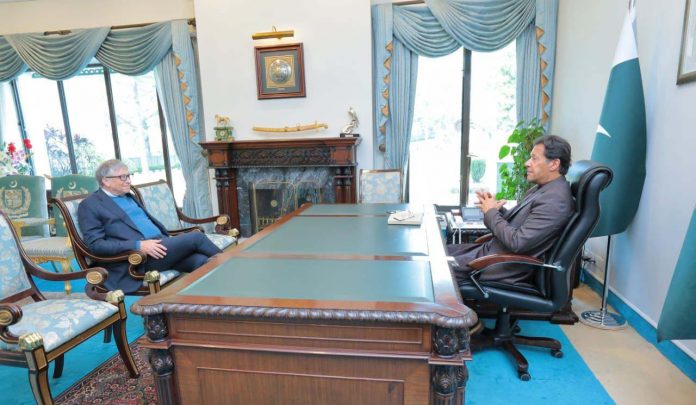 Bill Gates, co-chairman of the Bill & Melinda Gates Foundation, is in the nation for the first time. Dr Shehzad Baig, the program’s leader, briefed him on the country’s Covid-19 and polio prevention efforts when he visited the anti-polio program.

Faisal Sultan, the Special Assistant to the Prime Minister on Health, tweeted a warm greeting on Gates’ behalf.

According to the SAPM, Gates will meet with President Arif Alvi and conduct an assessment of the Ehsaas initiative as part of his upcoming activities.

Gates met with the NCOC’s head Asad Umar and SAPM Dr. Faisal Sultan during his visit to the country’s nerve center for Covid-19 reaction.

It is a pleasure to welcome Mr Bill Gates on his first ever visit to Pakistan. Planned engagements include review of progress on polio eradication; visits to NCOC and Ehsaas program as well as meeting the President, the PM and health leadership of the provinces.

It was during this morning session that Gates and his team were briefed by NCOC officials on their mission to contain the pandemic, as well as NCOC’s efforts to implement a variety of NPIs in order to accomplish so.

Pakistan’s efforts to combat Covid-19 were presented to the visiting group in a thorough manner” Statement: “Genome sequencing (variants’ prevalence) was also discussed with the delegation,” it said.

The benefactor also spoke about Covid-19 and the immunization campaign in particular.

Umar thanked Gates and his charity for their support of Covid-19 activities in Pakistan during the visit. In spite of Pakistan’s limited resources, Gates lauded the country’s efforts in preventing the spread of Covid-19 and ensuring public health protections.

Hosted @BillGates at the NCOC this morning. Shared with him the work which has been done for covid response in Pakistan and the role played by @OfficialNcoc. Thanked him for the support provided by the @gatesfoundation. He was appreciative of the covid response effort in Pakistan pic.twitter.com/pasYqnJ2gq

President Dr. Arif Alvi awarded Bill Gates the honorary title of Hilal-e-Pakistan for his contributions to Pakistani society, notably in the fight against polio.

Begum Samina Alvi, federal ministers, and other high-ranking officials attended an investiture ceremony at the Aiwan-e-Sadr when the honor was presented.

When Gates and the Pakistani premier met earlier this month, they spoke about a number of pressing issues, including the continuing Covid-19 outbreak and Pakistan’s efforts to eradicate polio.

For his part, the premier expressed his gratitude for the foundation’s efforts to battle poverty and sickness.

Prime Minister Imran Khan reiterated that Pakistan’s goal of eradicating polio is a top priority, and efforts are ongoing to expand the anti-polio campaign throughout the nation.