At Koffee With Karan 7, along with Shahid Kapoor, Kiara Advani’s shadowy past was exposed.

Shahid Kapoor showed off the Koffee With Karan 7 set with Kiara Advani. 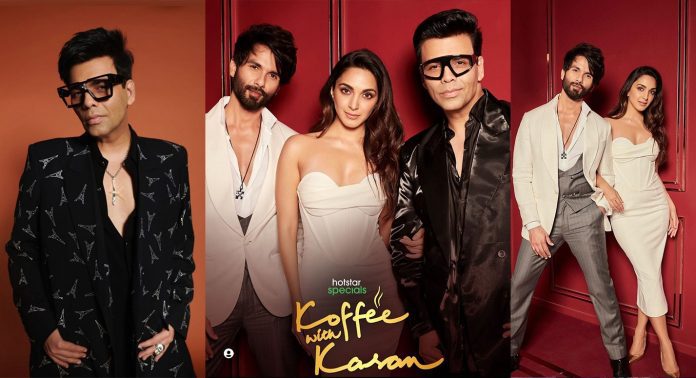 With the release of the seventh season’s latest episode of Koffee With Karan, which features Shahid Kapoor and Kiara Advani, fans are understandably ecstatic. We can all agree that these two actors create a fantastic Jodi on screen thanks to the success of Kabir Singh. Kiara was seen in the prior episode starring Sidharth Malhotra, in which she was pressured into discussing her relationship with him.

Actresses, according to Karan Johar, were provided with lust tales.

Karan also mentioned the difficulty in casting this scenario, saying, “This girl pretty much has an open orgasm in front of the whole family.” Kriti Sanon declined my offer, saying her mother wouldn’t approve. I figured that every mother would line up to prevent their daughters from entering, but I was wrong. The story is actually rather inspiring. I first saw Kiara at Manish Malhotra’s place; I recognized her from the face I’d seen in photos; of course, I recognized her as Alia Advani. Until just recently, her name was entered into my phone as Alia Advani. Destiny has destined me to choose an alias. In the hands of destiny. So, I asked her to appear in a short video with me the following day. She looked disoriented and asked, “Are you directing it?” After some thought, I decided to answer yes. At that point, she declared, “Yeah, I’m doing it.”

While creating the Iconic scene of Kabir Singh:

Kiara Advani and her cosmetics team may be seen on the set of season seven of Koffee With Karan. Kiara is being made up, and one of them is holding a mirror for the other. They are terrified by Shahid Kapoor’s Kabir Singh-style ranting and immediately stop what they are doing. The actor walks up to the actress from Bhool Bhulaiyaa 2 and asks, “Kisne touch Kiya usko?” in a Kabir Singh impression. When Kiara’s crew heard this, they abruptly left, leaving the two stars confused.

1. Karan Johar said that he had offered Kriti Sanon the role of Kiara Advani in Lust Stories before, but Sanon turned it down because she thought her parents would be upset.

2. In a second interview, Kiara Advani mentioned that she and Sidharth Malhotra had met at the Lust Stories after-filming party. In addition, she said that they are more than just buddies.

3. Shahid Kapoor said that he cringed when he saw himself act in Batti Gul Meter Chalu.

4. During the filming of Kabir Singh, Kiara claimed that she bitchslapped Shahid in the head for keeping her waiting for eight hours due to a debate over footwear. Moreover, she said she had fabricated her singleness.

5. Also, Kiara has shown that Sidharth Malhotra has a great voice and could become a famous singer because of it.

Share
Facebook
Twitter
WhatsApp
Previous article
According to a news report, the Pakistani Armed Forces will send soldiers to Qatar.
Next article
Rahul said an India-Pakistan meeting in the Asia Cup is “interesting.”
- Advertisement -

The petitioner says that the movie has "very unpleasant content that doesn't fit with our society's social values and moral standards and is obviously...
Community