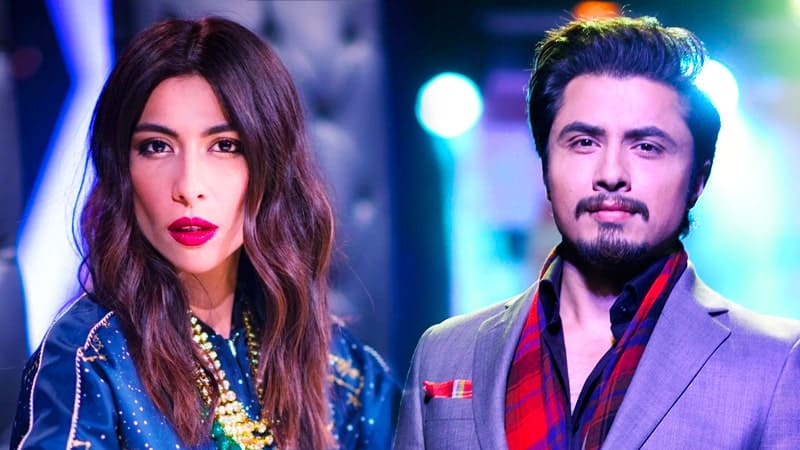 Karachi: Meesha Shafi served a legal notice to Ali Zafar on Wednesday over ‘false’ statements made on national television against her.

Meesha had claimed in April 2018 that she was sexually harassed by Zafar on multiple occasions. The singer had rejected the allegations and filed a defamation suit against her.

Ali Zafar’s lawyer has shared screenshots of a message allegedly sent by Meesha Shafi thanking the singer after the jamming session and concert at which she accused him of sexually harassing her.

The WhatsApp message, shared by Ali’s lawyer Barrister Ambreen Qureshi, was allegedly sent by Meesha in a group created by organisers of the concert, in which she said she had “a great time jamming and performing”. She also thanked Ali Zafar for “the kind words he had to say on stage.”

Last week during an appearance on Geo News programme Aaj Shahzeb Khanzada Kay Sath, Meesha had said she had thanked him but it was about the concert, not the jam session.

“Yeah, I was off to my other concert. He said some very… some things on stage when the audience was there and I said in courtesy to that.”

“It was about the concert, it was not about the jam at all,” she had asserted.

“Here is the screenshot of Meesha Shafi’s message to Ali Zafar that she denied on National TV. See for yourself. Truth always prevails,” Barrister Qureshi tweeted, along with the screenshot.

No body expected you to carry a GoPro #Meesha, luckily I had something close to it at the jam you accused me at. 11 witnesses from this jam, 2 of them women who went to court several times to testify against you but proceedings were delayed. Apologise or #FaceTheCourtMeeshaShafi pic.twitter.com/XkbGwjdhqg

Zafar then retweeted Qureshi’s tweet and posted, “When truth is hurled against falsehood, falsehood perishes, for falsehood is by its nature bound to perish. Quran 17:81”.

“When truth is hurled against falsehood, falsehood perishes, for falsehood is by its nature bound to perish.” Quran 17:81 https://t.co/QmheCQfh8V

Zafar’s legal team also wrote in the post: “Recently, in a TV interview when Miss Shafi was asked why after being harassed during the “jam” (music rehearsal) session, she would send a message saying “had a great JAMMING…”. She categorically denied this saying “no there was no mention of the JAM at all.”

The statement further read, “Luckily our client Ali Zafar has the entire chat saved. Here’s the message to prove how Miss Shafi has been conveniently misrepresenting facts starting from her initial statement till date and is proven wrong with facts and evidence every single time.”

“We hope this can put an end to even a shred of doubt in anyone’s mind. All further claims, allegations or questions, if any, that may be raised will also be met with the power of truth backed by evidence,” it added.

On Tuesday, Zafar had said he would respond to every verbal or written allegation through facts and evidence.

The singer’s lawyer Nighat Dad announced with a copy of the notice that the Teefa in Trouble actor is being sued for Rs2 billion under the Section 8 of Defamation Ordinance, 2002.

In a statement aired on Hum News on April 27 (a link of which you have posted on your Twitter account) you falsely claimed and published that our client is lying and has made false sexual harassment allegations against you just to get fame and recognition so as to get Canadian immigration,” the notice read.

In addition to the same, you have also claimed that our client wants to become Malala [Yousafzai], thereby implying that Malala also fabricated a false story like Meesha just to gain international recognition and immigration of a foreign country,” it further added.

A legal notice has been served to @AliZafarsays against his false, malicious and defamatory statements against our client @itsmeeshashafi on multiple National TV channels. #MeToo pic.twitter.com/1ofo1KNhDb

The notice further argued that Zafar falsely claimed that the case against him by Shafi has been dismissed by the ombudsperson adding that the case is challenged before Lahore High Court.

Moreover, it also revealed that Zafar’s claim of Shafi framing him for Canadian citizenship is also baseless as she had already been given the nationality in 2016.

An apology has been summoned by Shafi’s legal team within a span of 15 days or to pay the damaging amount.

Umar John - January 18, 2019
Kareena Kapoor Khan’s latest pictures from a photoshoot prove that there is no one as stunning as Bebo. Take a look. Some of our Bollywood...