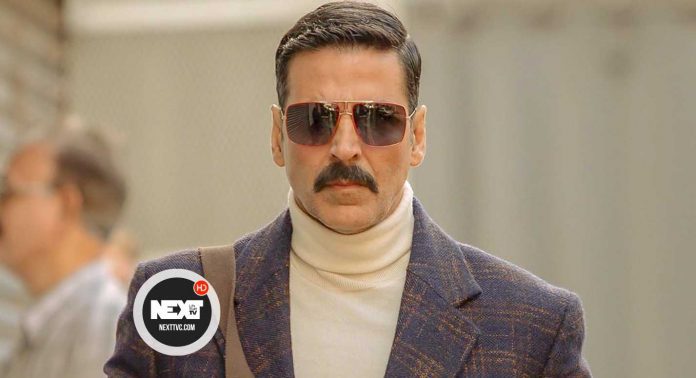 Among the first actors to head to an International location to shoot a film, Akshay Kumar has achieved a great feat today. The actor along with the team of Bell Bottom has become the first film in the world to start and finish amid the COVID 19 pandemic. Akshay along with Huma Qureshi, Lara Dutta and other crew members had jetted off to the UK to kick off Bell Bottom in August. Later, Vaani Kapoor also joined the filming. Now, on Thursday, Akshay announced that the filming of Bell Bottom was complete and it left fans completely stunned.

Akshay Kumar, Vaani Kapoor, Huma Qureshi and Lara Dutta starrer Bell Bottom began filming in August 2020. Now, the film’s shoot has been completed and to celebrate the makers dropped a new poster of the movie that began and ended shoot amid the COVID 19 pandemic.

Along with the announcement, Akshay released a new poster of the film and intrigued the audiences. In the new poster, the Khiladi Kumar can be seen dressed in a black suit with a black bag as he runs away from an aircraft in the backdrop. The espionage thriller is said to be based on the plane hijacks of the 80s where Akshay will be seen playing the role of the spy who comes to the rescue in the situation. Vaani will be seen as the leading lady of the film.

While releasing the poster, Akshay thanked the cast and crew of Bell Bottom in his caption. He wrote, “Alone we can do so little, together we can do so much. It’s teamwork and I am grateful to each and every member of the cast and crew. #BellBottomCompleted. Here’s the poster.” In a statement, Akshay mentioned that he was grateful to everyone in the crew and called it teamwork. Akshay said in a statement, “The new normal has made us realise a different way of working that none of us could have imagined. I hope our shoot during the pandemic reassures others that keeping all safety in mind, it’s time to get things moving again.”

Not just Akshay, other crew and cast members including Huma, Lara, Vaani shared the poster on their social media handle and rejoiced as their film’s shoot was complete. Just a few days back, Akshay dropped a photo of the entire cast and crew along with wife Twinkle Khanna and son Aarav from Glasgow when they wrapped up the schedule and headed to London for the final shoot. Now, on Thursday, the actor announced the wrap up of the film. The film is helmed by Ranji M Tewari and produced by Vashu Bhagnani, Jackky Bhagnani, Deepshikha Deshmukh, Monisha Advani, Madhu Bhojwani and Nikkhil Advani. It is slated to release on April 2, 2021.