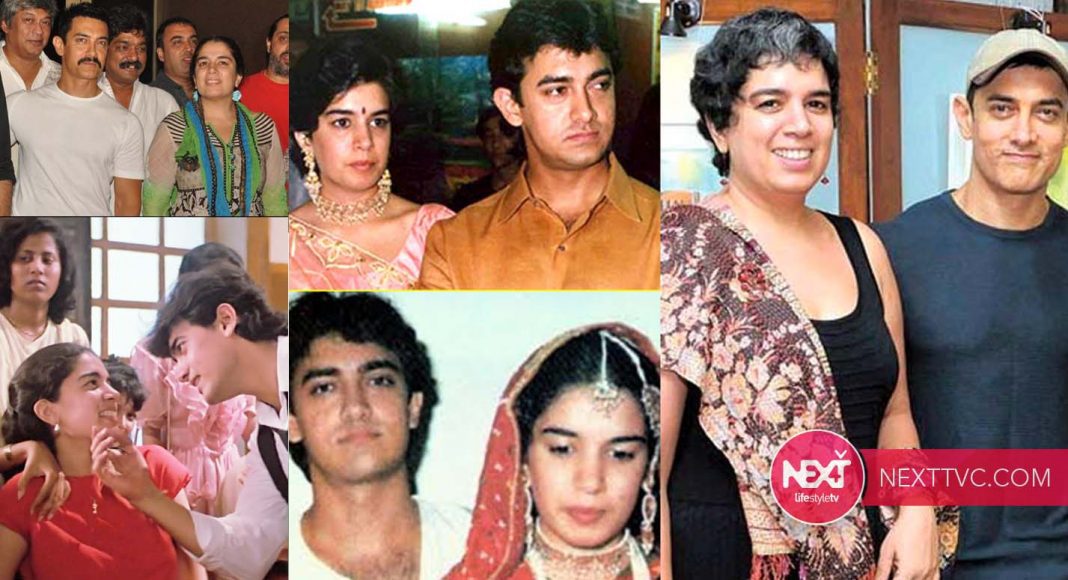 Aamir Khan when he married his first wife Reena Dutta.

The 2002 flick Saathiya, starring Vivek Oberoi and Rani Mukerji, is fondly remembered today as a sweet love story. One of the memorable sequences in this flick was the lead characters getting married to each other without their families’ knowledge. What’s more, after tying the knot, they go back to their respective houses and pretend to be not married at all. Author Sanjukta Nandy in her book ‘Khantastic – The Untold Story Of Bollywood’s Trio’ has revealed that even Aamir Khan’s life saw a similar episode when he married his first wife Reena Dutta.

Aamir saw her for the first time when he was around 20. She was standing at the window of the apartment opposite his. He felt a connection when he saw her and began spending more time at the window. Even Reena, he thought, was doing the same, thus giving him a hint that he should take matters forward. He did and told her that he liked her. She, however, felt that she had little in common with him and declined his proposal. This was a massive blow for Aamir Khan as he had already suffered severe heartbreaks before. But at the same time, his sixth sense told him that Reena, too, liked him but was reluctant to admit it. Hence, he told her to not hurry and that she should tell him her final answer in two days. He also promised that he won’t pursue her if her answer is still ‘No’. As luck would have it, Reena Dutta’s answer didn’t change even after two days. Aamir, as promised, walked away and no longer stood at the window.

It turns out that Aamir Khan’s instinct was right. A couple of months later, Reena approached Aamir and hesitatingly told him she liked him too. She was wondering whether he was still interested in her. Aamir was more than happy with his turn of events and thus began their relationship.

The relationship, however, had its share of problems. This was when Aamir was not earning and had even left his studies. Reena, meanwhile, was still a student, studying statistics at St Xavier’s College, Mumbai. Reena’s parents found out about their love story and clarified their displeasure. Both were sure that their parents would never approve of their relationship. Hence, they decided to marry secretly.

Aamir Khan turned 21 on March 14, 1986, and on the same day, he applied to the marriage registrar’s office. On April 18, they were called to Griha Nirman Bhavan to become man and wife officially. It was the day when the whole country was busy watching the historic India vs. Pakistan match at Sharjah, where Javed Miandad scored a sixer in the last ball. On the other hand, both reached the registrar’s office with few of their hands and within fifteen minutes, got married. Aamir Khan recalled in an interview that he spent only Rs 10 on this affair. This meager amount was splurged on a box of mithai, garlands, and possibly on using the BEST bus to travel to and fro.

Realizing this called for celebration, a small party was held at Aamir’s friend and director Satyajit Bhatkal’s house. Snacks and cold drinks were arranged, and Satyajit’s wife, Svati, one of the witnesses at the registration, got a cake. After making merry for some time, everyone left as Satyajit’s mother was to return, and hence, all traces of the celebration needed to be eradicated. After the party, Aamir and Reena returned to their house and continued with their lives like before.

Sometime later, Aamir Khan started shooting for his home production, his first film as an adult, Qayamat Se Qayamat Tak. One day, Reena visited the sets in Mumbai, and no one batted an eyelid as both were considered good friends. Aamir here thought of a plan. He convinced his cousin and director of the film, Mansoor Khan, to let Reena appear in the film for a few seconds. This was the day Aamir was shooting for the chartbuster song ‘Papa Kehte Hai.’ Reena initially felt shy, but Aamir persuaded her. For those unaware, she’s the one in red to whom Aamir sings ‘Gaalon mein khilti, kaliyon ka mausam’ and even touches her cheeks.

All was going well until Aamir Khan went down South for a schedule of Qayamat Se Qayamat Tak. Due to local disturbances on the Ooty-Bengaluru highway, the unit decided to move to Bengaluru to shoot. Meanwhile, Reena was in Mumbai and had gone for a college picnic. She had promised that she would call Aamir once she was back home. However, her call didn’t come through, and Aamir refused to leave until he would talk to her. The unit got restless as precious team was being wasted because of Aamir. This is when an emotional Aamir Khan told his sister Nuzhat about the truth. Finally, Reena called and the reason for her delay was because the picnic bus had broken down. It was only after Aamir found that she is fine did the unit move.

Thanks to this episode, both the families found out about their marriage. The Khan family glad welcomed here as their daughter-in-law. Reena Dutta’s parents were far from happy. Reena’s father, a senior officer in Air India, was so shocked that he fell sick and had to be hospitalized. Aamir quickly visited him and showed genuine concern for his condition. This act helped in winning his approval. Reena Dutta’s father always loved Aamir from there on and years later, he told Aamir that he could not have chosen a better husband for his daughter.

With Qayamat Se Qayamat Tak about to release, Aamir Khan was told by his PR manager R R Pathak to keep his marriage under wraps. The belief was that a married debuting hero would not unleash the desired craze. Aamir might have had reservations about this belief. But knowing that a lot was at stake, he agreed to do so.

The press, however, soon got wind of the truth. A few months after the release of Qayamat Se Qayamat Tak, its fans found out that Aamir Khan, the latest heartthrob of the nation, is already taken. Sometime later, they also found out that the beautiful girl in red in ‘Papa Kehte Hain’ song was actually the wife.

Thankfully for Aamir Khan, his popularity didn’t take a beating once news of his marriage was out. The couple remained married for 16 years and then they divorced. Aamir has two children from this marriage – son Junaid and daughter Ira.