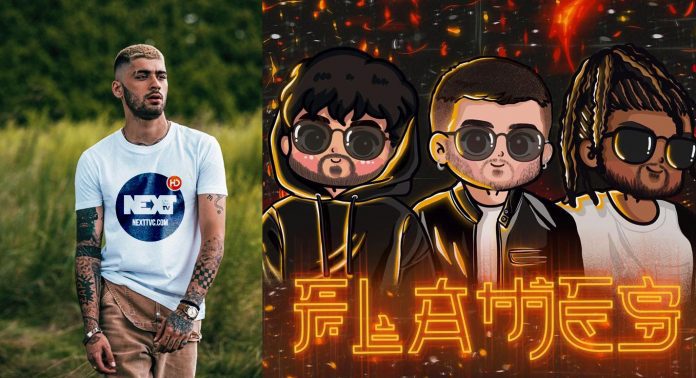 In December 2018, Zayn Malik followed up his successful Mind of Mine (2015) album with his next sophomore album, Icarus Falls. Icarus Falls featured several hit singles, which were earlier released by the singer, such as Dusk Till Dawn, Let Me and Entertainer. However, the album didn’t become as big a hit as Zayn’s solo album had. Since the release of Icarus Falls, Zayn has mostly been MIA for the longest time, apart from his contribution to the Aladdin soundtrack – a new rendition of the classic romantic ballad A Whole New World with Zhavia Ward.

The past few weeks saw Malik collaborating with the likes of Shaed and Sabrina Claudio for Trampoline Remix and Rumors. Keeping in tune with more collabs, a new single by Zayn titled Flames, also featuring R3hab and Jungleboi, has finally been released, much to the admiration of ZStans, who constantly crave for new music from their idol. Similar to the lines of Zayn’s Sour Diesel, this addictive, trippy track sees the 26-year-old singer ask his love to let him go and burn him up in flames, figuratively! While listening closely to the lyrics of Flames, one can’t help but feel the song as a reply to Zayn’s ex-girlfriend and supermodel Gigi Hadid.

Meanwhile, Zayn recently visited his hometown, Bradford, to help celebrate his mother Trisha Malik’s birthday along with his lovely sisters in tow. Trisha shared several photos from the family reunion and it was nothing but happiness and joy for the Malik clan.

What did you think of Flames? Let us know your views in the comments section below.