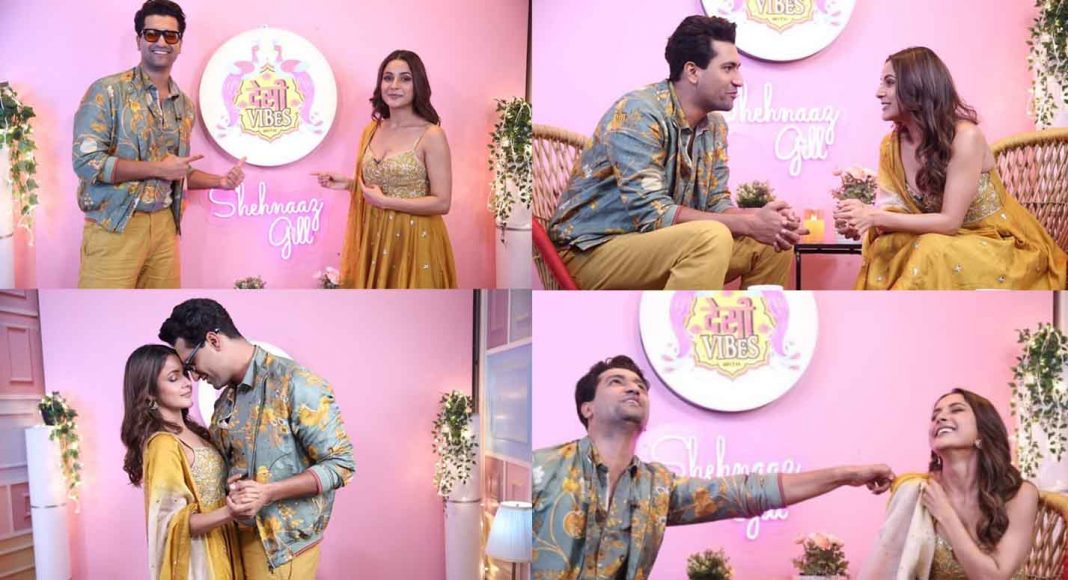 Vicky Kaushal talks with Shehnaaz Gill about why he chose to be an actor instead of an engineer on Desi Vibes.

“Desi Vibes with Shehnaaz Gill,” a new talk show starring the well-known actress, has quickly become a cultural phenomenon. Celebrities of the highest calibre are appearing on her show to promote their pictures, and seeing them joke around with the actress is a treat no fan should miss. Shehnaaz announced that Vicky Kaushal, star of the upcoming film “Govinda Naam Mera,” will be a guest on the show by posting a photo of the two of them together on Instagram. The episode of “Desi Vibes with Shehnaaz Gill” featuring Vicky Kaushal debuted on Shehnaaz’s YouTube channel today, December 11.

The actor Vicky Kaushal explains his career choice:
The episode of Desi Vibes with Shehnaaz Gill featuring Vicky Kaushal is full of hilarious exchanges between the two hosts. Vicky also told some stories about his life before he became a famous actor. Vicky Kaushal, who initially planned to become an engineer, recently spoke with Shehnaaz Gill on why he decided to pursue a career in acting instead. Shehnaaz made fun of Vicky by asking him why he was majoring in engineering when he really wanted to be an actress. To this, Vicky explained that he and his brother Sunny Kaushal have been performing on stage since they were very young, especially since they both have a passion for dancing. He admitted that he had considered getting an MBA instead of being an actor.

Vicky continued by saying that he and his fellow engineering students were taken to a large corporation during their second year in order to demonstrate the type of work they could anticipate doing after they graduate. Vicky admits that he will never be able to work on a computer full-time after witnessing other individuals do so. He mentioned that he had also been offered a position with an IT firm, but ultimately turned it down since he knew he couldn’t spend his entire life in front of a screen. Vicky explained that he decided to become an actor because he was only 22 years old and didn’t want to do something that would make him regret his choice when he was older.

About the song “Govinda Naam Mera”:

A new film starring Vicky Kaushal, Kiara Advani, and Bhumi Pednekar is about to hit theatres; the title is Govinda Naam Mera. In this case, it’s Karan Johar’s Dharma Productions behind the camera. A remake of Harrdy Sandhu’s popular Punjabi song Kya Baat Ay, named Kyaa Baat Haii 2.0, was recently presented by the film’s creators in anticipation of the movie’s premiere. Govinda Naam Mera, directed by Shashank Khaitan and available exclusively on Disney+ Hotstar, will be released on December 16th.