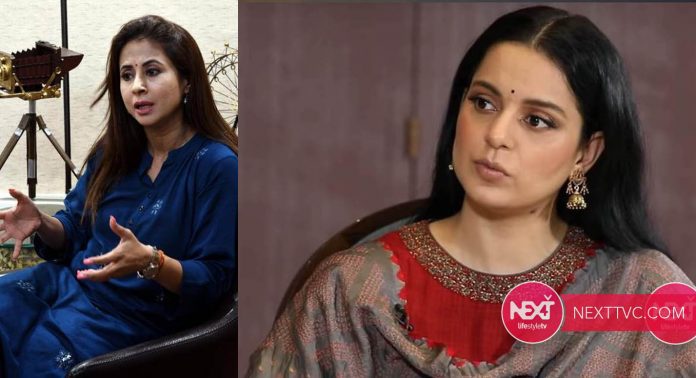 Actor-politician Urmila Matondkar lashed out at movie star Kangana Ranaut on Wednesday over disparaging remarks about Mumbai and film industry veteran Jaya Bachchan with her claims of all-pervasive nepotism and widespread use of illegal drugs in Bollywood.
Though she said she did not support the demolition of the “Queen” star’s office by the Mumbai civic body shortly after her comments last week, Ms Matondkar asked why taxpayer money was being used for Kangana Ranaut’s security.

Ms Matondkar, 46, a former Congress leader who contested the Lok Sabha polls last year, also pointed out that if Ms Ranaut did indeed have information about illegal drugs in Bollywood should look to her state – Himachal Pradesh – and would be better served by going to the authorities rather than tweeting about it.

“Which girl from a civilised cultured house would use this kind of language? Like ‘kya ukhaad loge’, ‘kiska baap ka kya hai’, speaking about Jaya ji the way she did,” Ms Matondkar told  in an interview.

“Yes, what happened with her office and a certain word being used against her was completely condemnable. I would never stand up for such actions (but) The Y+ security has come from our money. Can we say due to Act of God we cannot pay taxes? We cannot,” she said.

Ms Matondkar also took on Ms Ranaut for comments criticising Mumbai and comparing it to Pakistan-occupied Kashmir (PoK), declaring she would “never tolerate any defamatory remark” about the city.

“You cannot cross a certain line, speak ill of an industry that has made you everything. If some people are taking drugs or are drug addicts, you have no reason to compare it to mafia. When Kangana was not even born, Jaya ji was in the film industry. We’re talking about a lady here (Jaya Bachchan) who has herself been an icon. Which part of Indian culture tells you to lash out at people like this?” she said.

Kangana Ranaut had lashed out at Ms Bachchan, referring to her comments about the film industry in parliament that appeared to accuse Ms Ranaut of being thankless, using a Hindi proverb “jis thali mein khate hain usmein chhed karte hain”.

“What thali (plate) is Jaya ji referring to? The one that was offered was to appear in a two-minute role, a romantic scene, item numbers — and that too after sleeping with the hero? I taught the industry feminism, decorated the thali with patriotic films, this is my own plate Jaya ji, not yours,” Kangana Ranaut had tweeted in Hindi.

The subject of illegal drugs and banned substances in Bollywood made headlines after the Narcotics Bureau opened an investigation into actor Sushant Singh Rajput’s death in June. The agency has so far only arrested his girlfriend, actor Rhea Chakraborty, in this matter.

Ms Ranaut, against whom the Maharashtra government has also launched a drugs investigation, alleged that prominent actors were involved.

Yesterday, however, the government told parliament it has “no actionable input” in this matter.

Ms Ranaut, 33, also made headlines after criticising Mumbai Police for their handling of the Sushant Rajput case and claiming that she no longer felt safe in Mumbai.

Her comments triggered a furious backlash from Maharashtra’s ruling Shiv Sena, including a slur from senior leader Sanjay Raut, threats of violence and invitations to leave the city. She quickly also became embroiled in a row that included what she claimed was the demolition of her Mumbai office as revenge.

Ms Ranaut, who on Monday left Mumbai to return to Himachal Pradesh, took a parting shot as she did so, saying she was leaving with a “heavy heart” after being “terrorised” with attempts to demolish her office.

“Must say my analogy about PoK was bang on,” the actor said, in a sign the feud will likely rumble on.