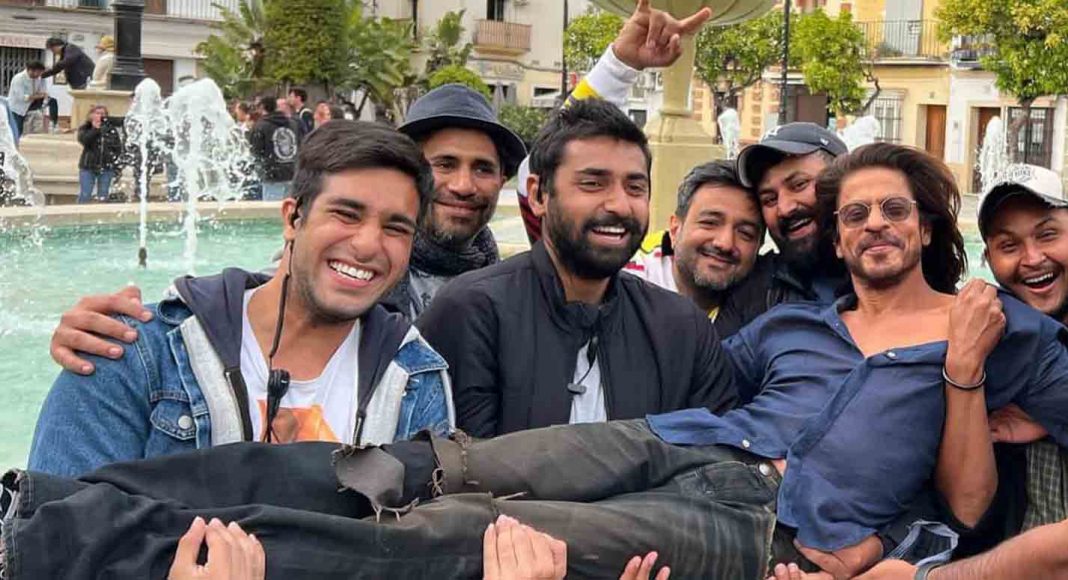 Fans of Shah Rukh Khan, who stars in the movie Pathaan, are going crazy over a new photo of the actor that has surfaced online.

Most fans can’t wait for Shah Rukh Khan’s return to theatres to see his new film, Pathaan. Previous appearances include 2018’s Zero, co-starring Katrina Kaif, and Anushka Sharma. His devoted audience can’t wait to see him in theatres. Deepika Padukone and John Abraham play leading roles in Pathaan, which was directed by Siddharth Anand. Earlier reservations are off to a strong start. Pathaan’s trailer and songs have piqued the interest of moviegoers, who can’t wait for its January 25 release. On the other hand, a new photo of Shah Rukh has surfaced online, and his devoted followers are going crazy over it.

On Sunday, a previously unseen photo of SRK taken on the set of Pathaan began circulating online. King Khan saw the photo because one of the crew members uploaded it to Instagram and showed it to him. The picture features the cast and crew holding the celebrity aloft for a photo op. Siddharth Anand is also featured in the film. Shah Rukh can be seen laughing and smiling with the cast and crew.

Fans were seen gushing about Shah Rukh’s appearance shortly after the photo was posted. Thank you for being so kind to our Shah Rukh Khan; you guys are a gem. “How cute!” exclaimed another fan.

Dancing to “Jhoome Jo Pathaan” in Dubai: Shah Rukh Khan
Shah Rukh was spotted at a lavish event in Dubai on Saturday. The Burj Khalifa was used to screen the trailer for his film Pathaan. Those who had gathered to see him could be seen singing and dancing along with his music. Moreover, they took pictures with him. Even SRK managed to wow the crowd with his rendition of the hook step to Jhoome Jo Pathaan. In front of his fans, he mimicked his lines from the movie. The celebrity looked dashing in all black.

More than fifty thousand people are expected to attend the first day’s screening of Shah Rukh Khan’s Pathaan.
Recent exclusive reporting by Pinkvilla revealed that 50,000 Shah Rukh fans are gathering for the first day’s first show of Pathaan. According to the co-creator of SRK Universe, who spoke with Pinkvilla, “This Pathaan FDFS is being put on by SRK Universe in over 200 different cities.” Over 50,000 SRK fans are expected to attend our shows, and we anticipate minimum bookings of Rs 1 crore as a direct result of our FDFS celebrations. We’re holding this celebration in multiple locations. There will be seven or eight opening-night performances in Mumbai and six in Delhi. And in the major metropolises, there will be multiple performances. “We won’t stop at the first showing of the day; instead, we’ll keep on watching the movie all day and all weekend long in honor of the Republic Day holiday.”

Career-wise, Shah Rukh Khan
Shah Rukh will finally have his year in 2023. His next two films, Dunki and Jawan, will be released after Pathaan. In Dunki, he will work with Rajkumar Hirani for the first time. Taapsee Pannu is also featured in this. Nayanthara, Sanya Malhotra, and Sunil Grover, all of whom appeared in Atlee, will be joining him in Jawan.

Sajjad Ahmed - April 16, 2021
According to reports, new rumors are now noting that Apple will soon be removing the top-notch on its iPhone models. Trusted Apple analyst Ming...