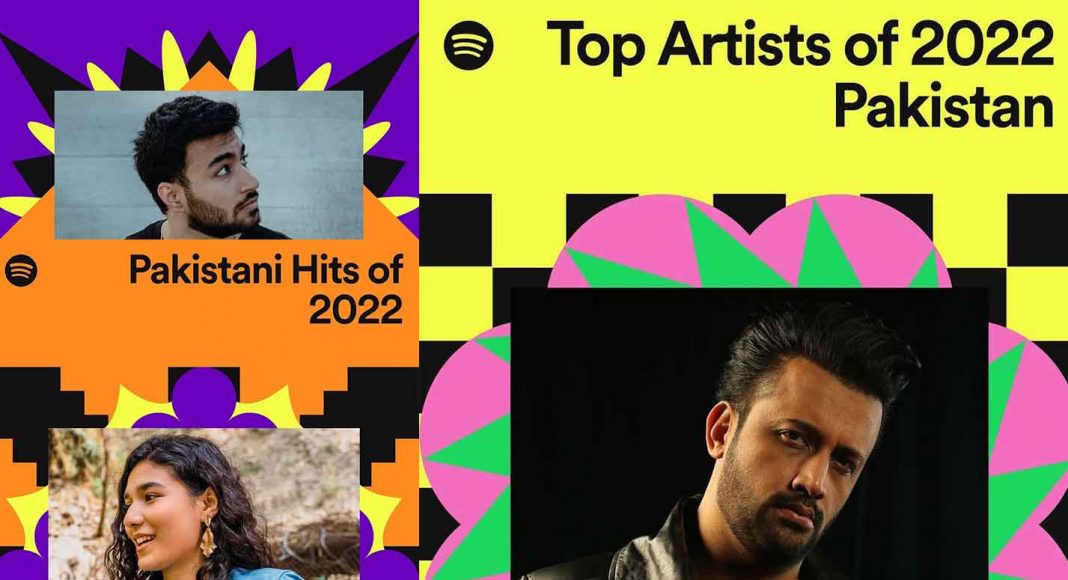 The musicians who won over Pakistan on Spotify.

The year 2022 has turned out to be the year of Atif Aslam as the most-streamed Pakistani artist, who has continued to dominate his fans’ hearts, followed by Talha Anjum, who has made it to the top of the lists and remains the listeners’ favorite.

Meanwhile, AP Dhillon is the most-streamed artist in Pakistan this year, followed by Arijit Singh, who is still very popular in the country.In addition to the artists mentioned above, Pritam, Gurinder Gill, Sidhu Moose Wala, The Weeknd, and Tanishk Bagchi also have a lot of fans.

BTS’s inclusion on the list is unsurprising, given the group’s devoted fanbase and the country’s growing love for K-Pop. The boy band that has established itself so firmly in the hearts of Pakistani music fans is among the year’s most streamed acts there.
Despite its success, Ali Sethi and Shae Gill’s Pasoori has not been able to shake its position as Pakistan’s most streamed song. This year, a song from Coke Studio became the first Pakistani song to ever reach the top three on Spotify’s Global Viral 50 list, which shows how popular it is all over the world.
Gill is the most-streamed local female artist and one of Pakistan’s biggest new stars this year. She is also the Equal Pakistan Ambassador for the month of December and will be featured in a number of promotional activities throughout the month.

The next three most-streamed songs in Pakistan were Bikhra and Iraaday, both by Fresh Finds Pakistan artists Hannan and Rovalio, and Excuses, a collaboration between AP Dhillon and Gurinder Gill. In fifth place was No Love by Shubh.

In 2022, a few new artists took the world by storm, dominating not just their home regions’ music scenes but those around the globe. One prime example of the incredible success of Pakistan’s indie music scene is Hannan, who has been at the top of the local charts on a consistent basis. His journey on Spotify began with the Fresh Finds Pakistan playlist last November.

And since then, his average daily streams have increased by a whopping 7,600%, and his fan base has grown by a factor of 4,600%. A year later, his name is still among the top ten most-streamed local artists.

Kaifi Khalil’s Kahani Suno 2.0 and Kana Yaari, which he sang with Eva B and Wahab Bugti, were among the most-streamed local tracks of the year, along with Raheem and Justin Bibis’s Peechay Hutt.