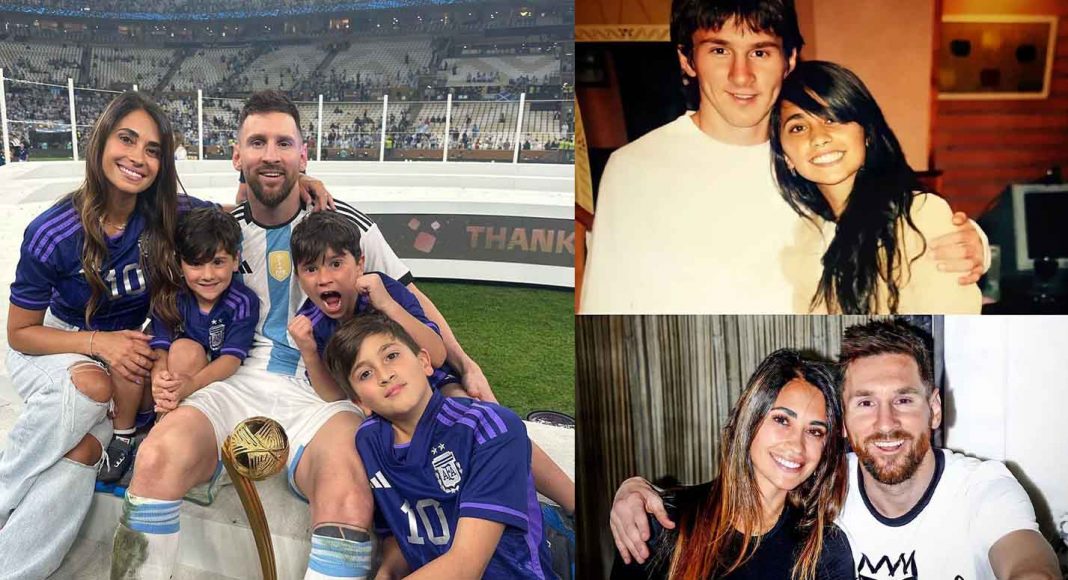 Here's a look back at a bond that the star player had as a child that developed into something far more significant.

After winning the world championship in football, Lionel Messi, the GOAT (Greatest of All Time) in the world of sports, chose to call it quits. The Argentine football sensation announced via his country’s media outlet, Diario Deportivo Ole, that the Qatar FIFA World Cup would not only be his final world cup appearance, but also his final appearance in the competition.

On Sunday, December 18, Argentina did a great job of winning. They beat France 4–2 in a penalty shootout after a 3–3 tie in which Messi scored twice and Kylian Mbappe scored a hat trick.

Let’s look at the Barcelona squad sensation’s love story with his wife, Antonella Roccuzzo, and how it shaped not just his career but also the wonderful person he is now as he quits after more than 20 years of playing.

How it began
Messi and Antonela first met when they were both five years old. Messi’s cousin was friends with Antonela, and the two frequently got together to play. Even though Messi was a bit of an introvert, he always opened out to Antonela. On the streets of Argentina, the two played with other children and grew close. Since then, they have remained in touch.

Reunited after tragedy
When Messi was diagnosed with a growth hormone abnormality that could thwart his aspirations of becoming a professional football player, he was just 11 years old. Jorge Messi, his father, did everything in his power to enrol him in a soccer squad for young players. After being signed by FC Barcelona’s under-14 division, Messi left for Spain. Messi planned a journey back to Argentina to be with Antonela when she lost her best friend in a car accident, yet there was no turning back for him professionally. The pals got back together, a love story developed, and Messi’s football career followed.

As two turned into five
The couple revealed that they were expecting their first child in June 2012. In November 2012, Antonela gave birth to their son, Thiago Messi. Mateo was born as the couple’s second child in September 2015, and their third kid arrived in March 2018. His given name was Ciro.

A century’s marriage
As she completed her bachelor’s degree in humanities and social sciences, Antonela made the decision to pursue dentistry. She quit school, nevertheless, to be near Messi, who was living in Barcelona at the time for his professional life. On June 30, 2017, Messi and Antonela exchanged vows in Rosario, Argentina, the location of their birth. Over 260 people attended their wedding at the City Center hotel, including a few of Messi’s football friends. Their nuptials were hailed as the “wedding of the century.”

What’s happening
In his final two world cup games, Messi is playing the finest football of his career, and Antonela is right there supporting him as usual. On her social media, she frequently posts noteworthy moments from each of Messi’s games. Messi recently said in a news conference following his team’s victory in a quarterfinal game, “My family is always present.” No matter what, my partner and kids are there, and it is the most amazing thing to watch them so joyful today.

Antonela wrote an emotional email to her husband in congratulations after Argentina won the FIFA World Cup 2022 because she was so proud of his efforts. “I don’t even know how to express the greater pride we feel for you,” she remarked. We appreciate you teaching us to never give up. We must persevere in our fight. Finally, you have won the title of world champion. We are aware of your years of suffering and your intense desire to succeed. We’re off to Argentina!

Sajjad Ahmed - May 17, 2019
Deepika Padukone took to Instagram to share her second look for Day 2 at Cannes International Film Festival 2019. The actor donned a black...

Jasdip Singh Chairman Sikhs of America condemns and denounces in the...