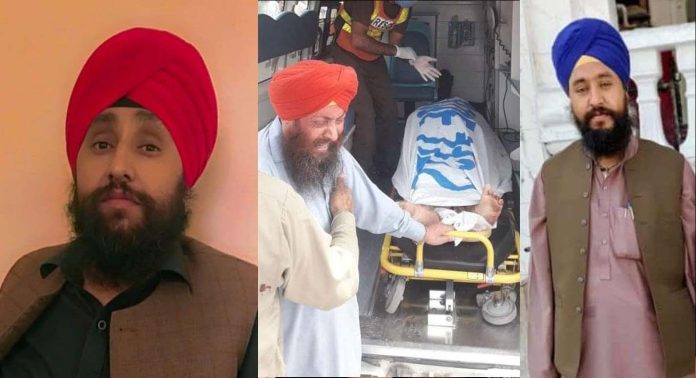 Two Sikh men were killed Sunday in Peshawar, Khyber Pakhtunkhwa province. Ranjit Singh, 42, and Kuljeet Singh, 38, were shopkeepers. Two unidentified males on a motorbike opened fire on them as they sat at their businesses in Batta Tal Chowk, sources claimed.

Prime Minister Shehbaz Sharif strongly condemned the incident and directed the chief minister of Khyber Pakhtunkhwa to ensure immediate arrest and punishment of the culprits.

Strongly condemn the killing of our Sikh citizens in Peshawar, KP. Pakistan belongs to all its people. Have ordered a high level inquiry to ascertain facts. The killers will be arrested & meted out exemplary punishment. My most sincere sympathies to the bereaved families.

PSGPC member Satwant Singh stated it appeared to be “targeted killings.” Both were turbaned Sikhs at their shops. Bikers arrived and opened fire. It appears targeted, he said.

It’s the second attack on Peshawar’s minority community in eight months. Satwant Singh, a Sikh shopkeeper from Peshawar, was shot dead in September.

“Enough is enough. The local Sikh community in Peshawar has no patience for more targeted killings.” Balbir Singh, a local gurdwara sewadar-cum-school teacher.

“No Sikh household in Peshawar has a vendetta against anyone. We are all impoverished folks who go to work every morning but fear returning home alive every evening. Killers storm our shops, point firearms at us and shoot. No law-and-order fear. Sikhs are killed for being minorities. Stop persecuting Sikhs! Every Sikh in Pakistan loves their country and is happy to be a Pakistani, but our people are being killed mercilessly every day. We love Pakistan but want to live in peace, said Balbir, who said that 500 Sikh families live in Peshawar and run spice, grocery, and pharmaceutical shops.

Local Sikh community members who requested anonymity stated there have been at least 10 such instances in Khyber Pakhtunkhwa since 2014. Some Sikhs were injured, while some died. “Dr. Soran Singh in 2016, Charanjit Singh in 2018, Ravinder Singh in 2020, Satwant Singh in 2021…the list is infinite. Local Sikhs are being persecuted in Pakistan, yet there’s little action or fear.

Both of our dead brothers came from poor households and ran grocery stores. Two motorcyclists entered their stores and shot them in the head. Like everyone else, we love Pakistan.”

Ameer condemned the deaths and urged the Pakistani and Khyber Pakhtunkhwa governments to arrest the suspects. They should be punished severely. Pakistan’s Sikhs love our nation and want to live here peacefully. Those aiming to destroy Sikh-Muslim unity in Pakistan must be exposed. Many Sikhs were killed this way before. Each Sikh in Pakistan is a true patriot and loves our nation, but such instances convey a bad message to the world. PLEASE PROTECT MINORS AND THEIR RIGHT TO PEACE IN PAK