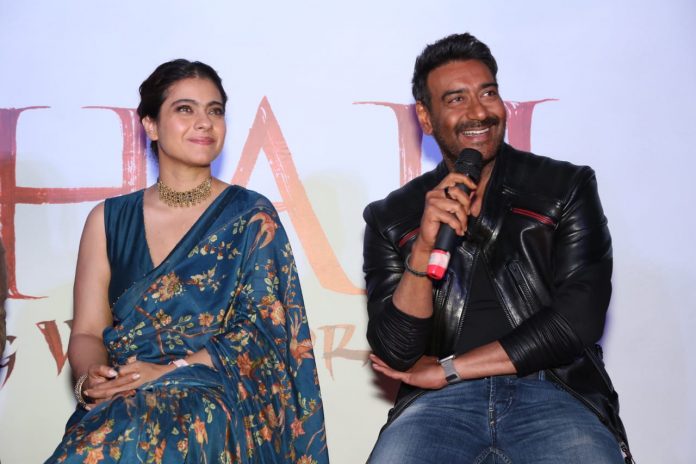 Recently, Ajay Devgan, Kajol, and Saif Ali Khan came to Delhi for the launch of the Second Trailer of movie Tanhaji: The Unsung Warrior. Director Om Raut and Co-Producer Bhushan Kumar were also present at the launch. The event was held at PVR Chanakyapuri, New Delhi.

Kajol spoke about the reason for doing Tanhaji, ” One of the reasons is Ajay of course but also my role is film has an innate strength of supporting her husband in going out and fight for the country. It is a story of an unsung hero and I am happy to be a part of such an amazing story.”

Ajay shared his thoughts about Tanhaji being his 100th Film, ” I didn’t even realize that this my 100th film until Om ( Director) told me this while shooting. The only thing that matters is that a person should keep working and the thing which scares is that this is not your last film.”

Saif Ali Khan was amazed to see the trailer, he shared his excitement for the movie, ” I seriously have never seen anything like this before. The 3D effects has made the trailer incredible as we have shot the film on sets ”

Director Om Raut spoke about Producer- actor Ajay Devgan, ” I am lucky to have him as a producer because he always stood by me and never said NO to anything. We have people from all over the world who have contributed to this film and it is all because of Ajay Devgan.”