"I might not support the political ideology of the director or may disagree with some actors on some issues but this is a story that I will definitely watch," wrote Smriti Irani

A few days after the release of the Thappad trailer, Union Minister Smriti Irani gave a big shout-out to the film. On Sunday, Ms. Irani shared a snippet from the trailer of the Anubhav Sinha-directed film, starring Taapsee Pannu, on her Instagram profile and wrote that she would “definitely watch the film” irrespective of the fact that she has “different political ideologies” from that of the film’s director and the actor.

“I might not support the political ideology of the director or may disagree with some actors on some issues but this is a story that I will definitely watch and hope people watch it with their families,”

read an excerpt from Smriti Irani’s post.In her post, Smriti Irani talked about instances where women have to “adjust” under circumstances involving domestic abuse and are often brushed away with remarks like this

to name a few. She signed off her post, saying, “It’s not okay to hit a woman… Not even a slap. Not even just one slap.” Take a look at the aforementioned post here:

How many think “ki maar pitai sirf gareeb auraton ke hi pati karte hai” How many believe “ki educated aadmi kabhi haath nahi uthata” How many tell their girls their daughter in laws“ koi baat nahi beta aisa to humare saath bhi hua lekin dekho aaj kitne khush hai“ I might not support the political ideology of the director or may disagree with some actors on some issues but this is a story that I will definitely watch and hope people watch it with their families. It’s not ok to hit a woman … not even a slap … not even JUST one slap Courtesy: @tseries.official

Thappad showcases the story of a happily married couple until one day the husband slaps his wife in front of a few guests at a house party, after which the wife decides to walk out of the marriage.

Taapsee Pannu, who plays the protagonist in Thappad, in a recent interview news agency IANS spoke about how the role was extremely “challenging” for her and said, “The character Amrita was suffocating for me in the end and I took it as a challenge. After 15 days of shooting, I started feeling claustrophobic. It was tough for me to get out of my firebrand image and mind-space and get into the skin of this character,” said Taapsee.

Shekhar Kapur was supposed to make the film Paani with Sushant Singh Rajput. However, after months of prep, the film got shelved. The filmmaker had earlier...
Read more 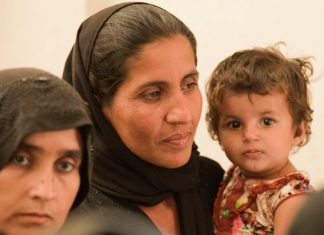 Sajjad Ahmed - May 19, 2019 0
PESHAWAR: Expanded Programme on Immunisation (EPI) has decided to pay parents in merged tribal district for vaccinating their children against preventable diseases. Parents will receive...