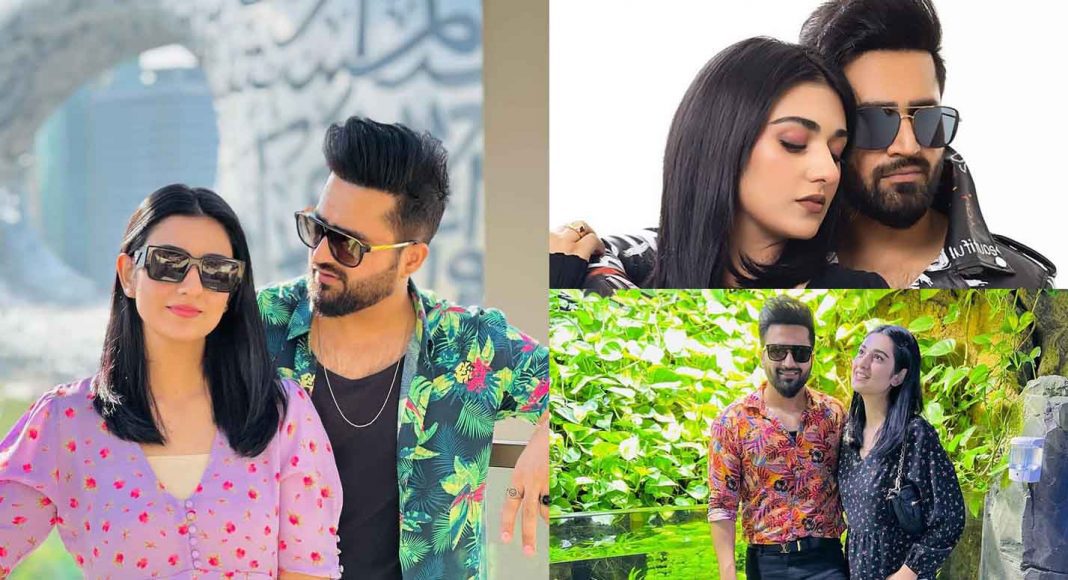 Sarah Khan said no to appearing in her husband Falak Shabbir’s song “Billo Rani,” despite a request from him to do so.

The couple was seen on "The Mirza Malik Show."

Birds of a feather Falak Shabbir made a revelation during a recent appearance with Sarah Khan on The Mirza Malik Show. Sarah revealed that she was concerned that her future husband Falak would prevent her from continuing her career in show business after they married.

Falak, ever the proud husband, responded to the question of who uses their phones more by recalling an anecdote that proves he is the best husband ever: “She’s just got 1 million followers today, so that should tell you who’s online more.”

When we first started talking, Sarah was worried that I would try to discourage her from continuing her work. As far as I’m concerned, we shouldn’t stand in the way of someone who is immensely popular, has a dedicated following, has found success in their chosen field, and wants to continue working in that field because, above all else, they enjoy doing it. “They have a right to do that,” he declared.

Falak added that he has no problem with his wife’s social media activity, but he does want to make a point about how it is fine for women to choose to stay at home after getting married. Unless there are women who prefer to stay at home and raise children, I believe that all husbands should be understanding of their wives’ professional aspirations. It’s important to recognize the validity of that.

Next, Sarah discussed the worst-case scenario for any celebrity: the targeting of their own child. Before Alyana became a target for online harassment, Sarah had trouble dealing with the personal effects of trolling and hateful comments.

My attitude toward trolling shifted. The constant criticism I receive for the clothes I wear or the way I sit has left me wondering why I am singled out for hostility. However, recently, other people have begun instructing me on how to raise my kids. She said, “They won’t stop texting me with advice on how to hold her neck or what not to feed her or anything else. Who else but mothers can provide the best care for their children? Because of Alyana’s example, I now ignore all criticism and internet trolls.

Falak, the romantic rose-giver, has never featured her in any of his songs, which is surprising given that she is married to a singer. Sarah has repeatedly denied being in any of his music videos, but everyone was shocked when she said she is not a dancer. I really dislike dancing. “I’m still shy even when nobody’s looking,” she admitted.

After Falak “requested” and “begged” Sarah to appear in the music video for his new song “Billo Rani,” Sarah once again declined. In typical hopeless romantic fashion, he continued, “Now when I do music videos with models, you wouldn’t see the same expressions that I had when I was single because all my love is for her.”