About a year ago, Rosie Gabrielle a Canadian woman, came to Pakistan with just her bike and a sense of curiosity about the country. She traveled to a lot of regions of the country; Lahore, Swat, Multan, Gwadar and beyond. As she traveled within the country and encountered the sights and sounds; the people she felt an affinity with them.

When she first came to Pakistan, Rosie Gabrielle said she felt peace in places of Muslim worship

WHAT BROKE ME INTO TEARS . I’ve had So many amazing experiences so far here in Pakistan. One that was particularly special was my time at the Bullah Shah Tomb in Kasur. The shrine was built after the death of The Sufi Poet and people from all parts of Pakistan came to pray there. In Islamic culture, it’s typical that men and women Pray in separate areas. I met the elder who was guardian of the tomb she blessed me, and told me how to pray there. After offering my prayers, the woman informed me she was a descendent of Bullah Shah, then took me inside the tomb where only men are permitted. This was a HUGE honor and privilege, something unique. Standing in this room, I could feel the intense pulses of energy. My channel was clear and direct. It was a message that all beings would be as one. That there was no separation between you or I. That the veins of life stretched out and connected each of us, flowing the energy of love and oneness. I returned back that evening, to continue my prayers in this magical place. And it was then that it struck me so deep. Tears began to role down my cheek. I, as a foreign female, who is non Muslim, have been so accepted into this culture. Without judgment, without question. I’ve been treated as family and given So MUCH love, and kindness, so genuine and pure in heart. My heart hurt. Deeply. Knowing that this world, has such a negative view on Muslim people and of Pakistan. That they have NO idea what Islam is actually about or the true heart of these people. That THEY are the ones terrorizing these beautiful peaceful souls. If they only knew. That Muslims, and Pakistani people, are model citizens for the entire WORLD. For all of humanity. That Islam is peace and LOVE. And I, traveling as a solo female here in Pakistan, have only received the highest of care and attention, from all people. This is how we SHOULD be to one another. But this is not how it is in the west. There is too much fear, anger, hate. Which is what lead me to my desperate cry on my stories last week. The world needs to wake up. This is NOT how we were meant to live. And I hope that by me sharing, people will be inspired to open their hearts.

Speaking to MangoBaaz regarding her first arrival in Pakistan, here’s what Rosie Gabrielle said:

“I get a lot of shocked faces, a lot of smiles. People in Pakistan seem to be very excited to see me on a motorcycle. The funniest reaction was that of a 6-year-old, who asked if I was a boy or a girl when he saw me riding the bike.”

** UPDATE**** Due to some health complications, I’ve had to postpone meetup! I’m VERY sorry!!! I was looking forward to meeting you all- but I need to get myself better first. I will be returning to Pakistan this spring and will have a BIG meetup for you all. My apologies for short notice 🙏 ISLAMABAD MEET-UP !!! . This THURSDAY, December 26th . Location and time to be announced On STORIES in next coming days so stay tuned! . If you ever wanted to meet me, come down and say hi, don’t be shy! . Who’s coming?! Comment below 👗 special dress Embroidered by one of my fans at my last meetup in karachi 💗

After spending a year in Pakistan, Rosie Gabrielle just decided to take the leap and convert to Islam

She said she had always led a hard life and there had always been a lot of hurt in her heart. And after spending time in Muslim countries and after God lead her to Pakistan, she saw the kind of peace Muslims have in their hearts and wanted something similar for herself.

She said the religion she had grown up with never resonated with her. And that she had denounced it 4 years ago and went on her own spiritual journey of discovery which has eventually lead her to Pakistan and then Islam.

She said she knew Islam has highly criticized the world over and had a bad reputation but she knew the true meaning of the religion; which are peace, love, and oneness.

She said she had always been a Muslim since she believed in the Shahada already; in the Oneness of Allah and the Prophet Muhammad (PBUH) being the last messenger. So thus, it was only a matter of time before she officially

I CONVERTED to ISLAM☪️ . What lead me to this Big decision? . As I mentioned previously, this last year was one of the hardest in my life, and all life’s challenges have led me to this point here and now. From a young child, I’ve always had a unique connection with creation and special relationship to God. My path was far from easy and I carried a lot of anger in my heart from a lifetime of pain, always begging God, why me? Until ultimately coming to the conclusion that all is meant to be, and even my suffering is a gift. . Never resonating with what I was brought up with, I denounced my religion 4 years ago, going down a deep path of spiritual discovery.Exploration of self, and the great Divine. I never let go the sight of the Creator, in fact, my curiosity and connection only grew stronger. Now no longer dictated by fear, I was able to fully explore this righteous path. . As time passed, the more I experienced, the more I witnessed the true nature and calling for my life. I wanted to be free. Free of the pain and shackles that was hell. Liberation from the anger, hurt and misalignment. I wanted peace in my heart, forgiveness and the most profound connection with all. And thus started my journey. . The universe brought me to Pakistan, not only to challenge myself to let go of the last remaining traces of pain and ego, but also to show me the way. . Through kindness,& humbled grace of the people I met along my pilgrimage, inspired my heart to seek further. Living in a Muslim country for 10 + years and traveling extensively through these regions, I observed one thing; Peace. A kind of peace that one can only dream of having in their hearts. . Unfortunately Islam is one of the most misinterpreted and criticized religions world wide. And like all religions, there are many interpretations. But, the core of it, the true meaning of Islam, is PEACE, LOVE & ONENESS. It’s not a religion, but a way of life. The life of humanity, humility and Love. . For me, I was already technically a “Muslim”. My Shahada was basically a re-dedication of my life to the path of Oneness, connection and Peace through the devotion of God. If you have any Q’s comment below

While there are a few followers who were not happy with her decision, Rosie answered their comments in the best possible way.  But some others were only curious about what this decision meant and a plethora of people was congratulating her and giving her their duas.

We wish Rosie good luck on both her future spiritual and physical journey.

2019 what a year it’s been! Probably the most challenging year of my life in all aspects. Although I say this every year, I think this year takes the cake. . The biggest lesson I learnt this past year, is that “Everything happens for a reason”. And even though this has been my motto for some time, it has now become a deep seeded knowing and appreciation. To the point that no matter what happens, I am grateful to the core. Because everything is here to teach me and help me grow. EVERYTHING. . This year I made the intention to become the best version of myself. And before one can attain this goal they must peel off everything that does not serve them. This process is beautiful, yet excruciating. Because in order to let go, you must first witness and experience ALL of the pain you hold on to. So this is what my 2019 looked like. Death. A metaphorical death of course, but a passing none the less. Where I was challenged and pushed to my ultimate limits, physically, emotionally and spiritually. So that I may witness first hand exactly what I need to let go of as my ego slowly died off. . I was ripped in two left broken and raw, for all my demons to be exposed and made new. And for that, I‘m eternally grateful. . “Break my heart for what breaks yours” is the quote I have permanently marked on my left forearm. Most people think it’s a reference to romance, but it’s not. It actually refers to God’s heart. For God see’s everything in this world, everything people go through. He see’s their heart, their hurts, the struggle, their pain. So it says, let me see everything that God sees, so that I may have compassion and be a gifted healer I’m called to be. It’s a huge commitment to make this kind of declaration and plead for this burden, but it’s what my soul longed for, it’s who I’m meant to be. . So I humbly give thanks for each and every experience this last year, good and bad, as I gently merge into my cocoon to reflect and process it all. Emerging gracefully into 2020 spreading my wings and soaring to the next level. . Here’s to life in all its glorious beauty. Wishing you all a very blessed New Year💗🙏 . . 📸 tripod & remote . 👗 @beautyandthebanditdesigns 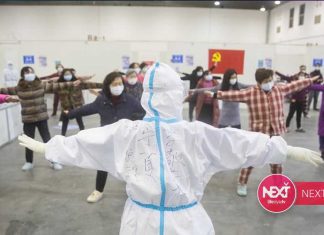 Sajjad Ahmed - February 28, 2020 0
In what is being termed as a major win against the new coronavirus — COVID-19 — for China, the country has discharged a total...