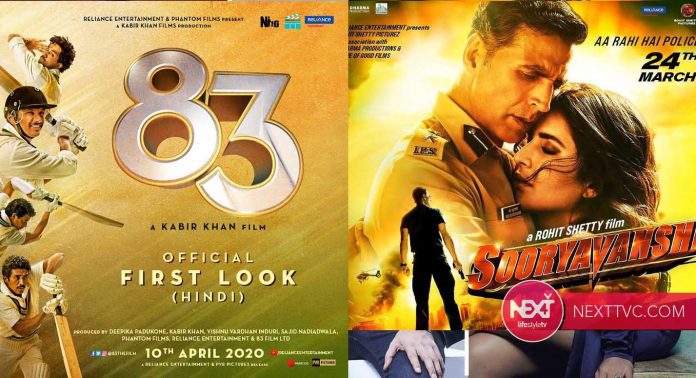 The threat of coronavirus is increasing by the hour and all measures are taken by the authorities to combat the global pandemic. In order to ensure the nation’s safety first, the makers of the film 83 have put the release of the film on hold, which stars Ranveer Singh and Deepika Padukone.

The actor wrote, “83 is not just our film but the entire nation’s film. But the health and safety of the nation always come first. Stay safe, take care. We shall be back soon!”

In case of Sooryavanshi, Bollywood Hungama reports that Akshay, Rohit Shetty, Shibashish Sarkar of Reliance Entertainment and Karan Johar have been holding meetings and the film is likely to be postponed.

“Though the exact date is not confirmed yet, the announcement of the delay and the new release date is expected to be done on the coming weekend,” the report quoted a source as saying.

“The postponing of Sooryavanshi’s release seems like a wise decision now since footfalls to the theatres seem to be falling at many places both in India and overseas. The Coronavirus threat is real and people don’t want to take any chances,” the source added.

The official statement read, “In the wake of the risks posed by the recent outbreak of COVID-19 and the growing health concerns, the release of 83 has been put on hold. We will take a decision regarding the next course of action once the conditions return to normal. We urge our fans to take all the necessary precautions and take care of their loved ones. 83 is a film about fighting the odds and we hope we all will bounce back from this soon. With Love.Team.”

Ranveer Singh will be seen as Kapil Dev whereas Deepika Padukone will essay the role of his wife, Romi Dev.