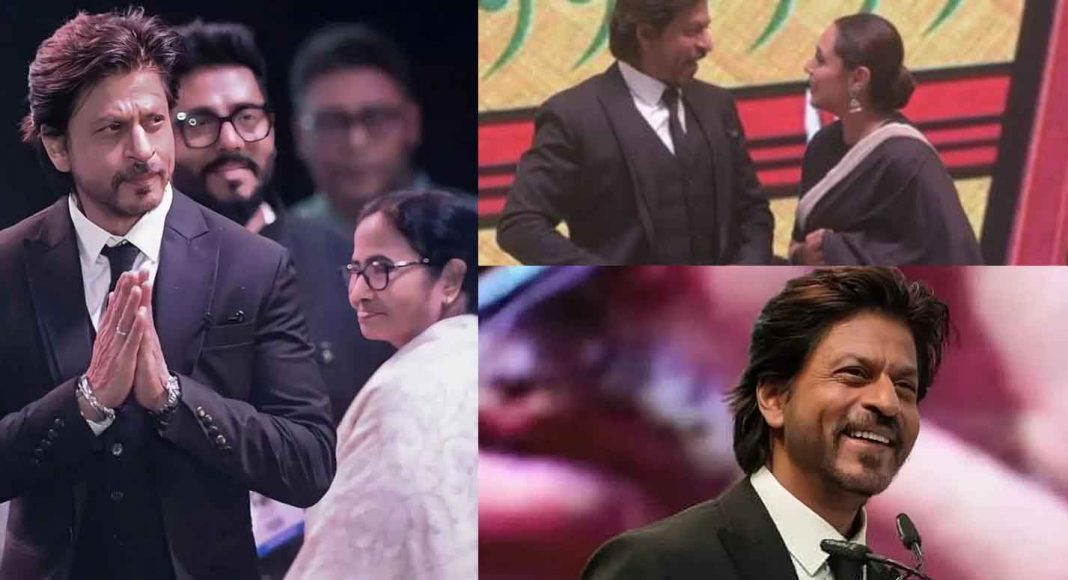 Rani Mukerji greets Shah Rukh Khan with a kiss on the hands at the KIFF 2022; Amitabh Bachchan, among others, make an appearance.

Shah Rukh Khan and Rani Mukerji were spotted earlier today leaving Mumbai’s private airport for Kolkata, where they will be attending the Kolkata International Film Festival. Lovely in a black saree, the actress was quite the sight. Since then, numerous photos from the event’s stage featuring SRK, Rani, Jaya Bachchan, Amitabh Bachchan, Kumar Sanu, Shatrughan Sinha, and others have spread across social media. Below, you’ll find some images from the event’s interior.

Many Bollywood stars, including Shah Rukh Khan, Rani Mukerji, Jaya Bachchan, and Amitabh Bachchan, were photographed at the event.

Shah Rukh Khan is pictured here looking suave in a sleek black suit. He was dressed all in black, from his suit to his tie to his shoes. SRK can be seen in the first photo, kneeling down to touch Amitabh and Jaya Bachchan’s feet. Jaya dresses similarly to Big B, who wears a beige kurta pajama and a blue coat. Rani Mukerji can be seen kissing the Pathaan actor’s hands in the next photo. The next picture features a who’s who of Indian showbiz, all crammed into one frame. Shatrughan Sinha, Saurav Ganguly, and others are all there.

After his speech at the 2022 Kollywood International Film Festival, Shah Rukh Khan became a fan favorite.
Shah Rukh Khan addressed the criticism leveled at him on social media and defended the positive influence of cinema. Put simply, social media is molding the stories we tell about our times as a whole. Many people worry that the proliferation of social media will have a negative impact on the movie industry, but I think movies are more important than ever now. In many cases, the focus of social media is so narrow that it reduces people to their most primitive selves. It’s also a place where the prevalence of negative sentiment drives up social media usage and, by extension, the platform’s market value. He argued that such efforts only serve to further fragment and destabilize the group’s shared story.

“In a way, it is best suited to support a collective counter-narrative that speaks to the larger nature of humankind—a narrative that highlights humanity’s huge capacity for compassion, unity, and brotherhood.”

Sajjad Ahmed - October 21, 2020
Wasim Butt is the first Pakistani to be nominated as an honorary judge in the German court system. The City of Clerby’s Administrative Committee has...