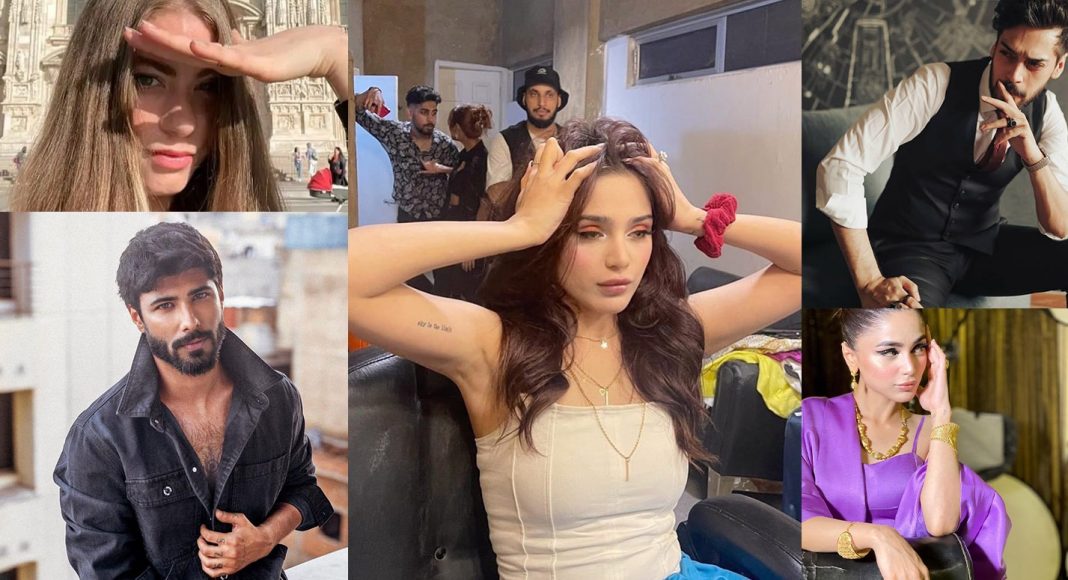 A British model said that singer Aima Baig cheated on actor Shahbaz Shigri while she was engaged to him.

“It was Aima Baig,” Mair said on Instagram. I’m more thoughtful than Ahmed. I bought him a personalised Zippo as one of his first gifts. I loved that. When he travelled to Dubai to meet Aima, she flew him away. He bought her a gift while they were having fun. Personal Zippo, “Accused Mair.”

In another account, Mair claimed, “This will garner more attention because this lady is famous in Pakistan, or as Qes put it when boasting about cheating on me, ‘one of the most famous women in Pakistan.”

She shared a chat screenshot with Shigri. In the screenshot, the actor said it’s not easy to think Ahmed and Baig didn’t cheat. Shigri reportedly asked for more screenshots. He wrote to Mair, “I’d be grateful.” “Know now, don’t later.” On the flip side, he purportedly said, “All we can do is choose whether we’re willing to stretch our own limitations and believe in people we love (however flawed they may be).”

Ahmed responded to Mair’s charges on Instagram. “A woman from my past is saying inappropriate things about me. She’s accused me of stealing from her and is spreading bogus screenshots and information “writing “She approached my clients with a similar scenario earlier this year. After considerable frustration and counsel from my family, I paid her 10,000 euros to achieve peace. “

Mair is accused by Ahmed of being a “never-employed lady.”Even while we were together, she lived off sugar daddy. ” Mair’s “serious mental health troubles are unfortunate,” he said. Ahmed added, “It’s understandable, but I can’t let this nonsense continue. She extorted me 10,000 euros, made racial statements, cheated on me, and now accuses me of doing the same to her.

Mair is unemployed and spent Ahmed’s money,” he wrote, “No way. Until her mental health is evaluated, I won’t sue. “

Ahmed posted on Instagram: “I loved Mair, which is why I stayed with her so long. I ignored emotional abuse, strong outbursts, and drug-induced paranoia. Before, I was sympathetic. She hasn’t asked for money, so I’m unsure what she wants. Her behaviour reminds me of the psychotics I’ve met. If you care about her, don’t encourage her behaviour until a mental health team has been to her. “

Baig and Shigri are divorced.

The Coke Studio singer revealed her breakup with Shigri last week. Baig said on social media, “Yes, I will always admire this individual for making me laugh.” Sometimes sh*t has a purpose. Yes, we’re done. “Don’t worry, we’re both alright.”

“I was respectful,” Singer continued. People choose how to express their inner feelings, defining who they are. I’m telling anyone who’s wondering if they’re together. Nope, sorry. I’m not with Shahbaz. ” She ended with, “PS: No more sorry texts’. We’re good.”