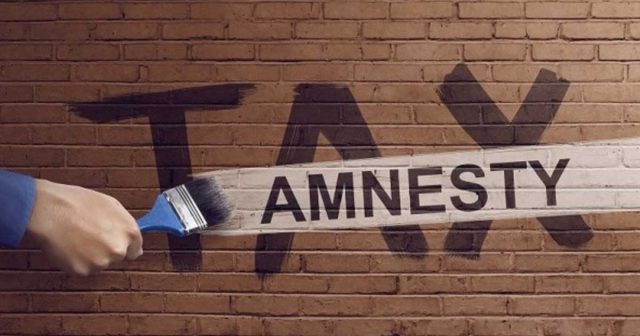 Hafeez Shaikh says ‘basic purpose’ of scheme is to document economy, make ‘dead assets functional. 4pc will be charged for whitened money if it’s brought into Pakistan; 6pc will be charged in case people want to keep money abroad

ISLAMABAD: The Pakistan Tehreek-e-Insaf (PTI) government on Tuesday finally approved the Asset Declaration Scheme after weeks of scrutiny amid internal opposition in a bid to “document the economy and to bring dead assets into the economy and make them functional”.

PM’s Adviser on Finance Dr Abdul Hafeez Shaikh briefed the media on the scheme after a meeting of the federal cabinet. He was accompanied by Federal Board of Revenue (FBR) Chairman Syed Shabbar Zaidi, Minister of State for Revenue Hammad Azhar and Special Assistant to the Prime Minister (SAPM) on Information and Broadcasting Dr Firdous Ashiq Awan.

Addressing reporters, Shaikh said people will have the opportunity to become part of the scheme until June 30, 2019. Every Pakistani citizen will be able to avail the scheme except for government officials, public office holders and their dependents.

He said the “basic purpose” of the scheme was not to generate revenue — as media reports had speculated — but to bring dead assets into the economy and make them functional.

“We have tried to make this scheme very easy to understand and implement,” the adviser said, adding that the scheme has realistic targets with low rates. He said the plan was not to “intimidate” people but to encourage businessmen to participate in the legal economy.

According to the scheme, Pakistani citizens can whiten their assets within the country and abroad after paying a certain amount. A rate of four per cent will be charged for whitened money and the cash will have to be brought into Pakistan to be kept in banks, he said, adding a rate of 6pc will be charged in case people wanted to keep their money abroad.

In the case of properties, their value will be considered 1.5 times more than the FBR-assigned value.

The amnesty scheme also has the facility for citizens to whiten their benami accounts and properties before the Benami Transaction (Prohibition) Act, 2017, is enforced.

The federal cabinet has given go ahead to the amnesty scheme two days after striking a deal with the Fund amid much criticism by the opposition parties.

The finance adviser defended the deal with the IMF, saying the bailout package favours Pakistan. “Those who are opposing the IMF programme are the ones who had already done the same,” he responded to question.

He said actions such as reducing the gap between imports and exports, reducing losses of state-owned entities and curtailing expenditure are in favour of the country.

In attempt to allay concerns regarding a hike in the power tariff, the adviser said electricity tariff will be increased under the IMF accord; however, it won’t affect people who consume less than 300 units.

“Pakistan goes to the IMF again and again because it fails to increase its exports, foreigners remain reluctant to invest in the country and other issues,” the adviser added.

Answering a question about how this scheme is different from the ones offered in the past, State Minister Hammad Azhar said unlike the past amnesty schemes, the one being introduced now makes it mandatory for people declaring assets to become tax filers.

He said the scheme was not being offered to generate revenue and contains an option for businesspersons to revise their balance sheets.

Earlier, Prime Minister Imran Khan chaired the cabinet meeting during which the scheme was approved.

The scheme has been announced two days after the government reached an agreement with the International Monetary Fund (IMF) about a $6 billion bailout to implement an “ambitious structural reform agenda” over a period of 39 months. It was reported last month that the timeline of the IMF bailout package had complicated the launch of government’s first tax amnesty scheme.

The amnesty scheme was first expected to be approved on April 8. But it could not be approved in two meetings of the federal cabinet last month, before the exit of then finance minister Asad Umar.

The ruling Pakistan Tehreek-i-Insaf (PTI) had strongly criticised amnesty schemes introduced by previous governments while it was in opposition.

Rejecting an amnesty scheme offered by then prime minister Shahid Khaqan Abbasi in April last year, PTI chief (now PM) Imran Khan had said: “Such schemes are created to benefit the corrupt. Only corrupt elements become the ultimate beneficiaries. This is to fool the honest people of the country and encourage corrupt elements to plunder and amass wealth, only to whitewash it later on.”

In fact, he had gone to the extent of pledging not only to reverse the scheme but also to investigate those benefiting from it, if he was voted to power. He had warned tax evaders not to take advantage of the scheme and come into the tax net; a claim that was considered to be a setback to the success of the scheme.

Following the appointment of Dr Shaikh as Adviser to the Prime Minister on Finance last month, the government had said its proposed amnesty scheme would go ahead without any major change despite a change of command and internal opposition.

The adviser on finance desired that it should be a people-friendly scheme, helped document the economy and brought more non-filers into the tax net instead of just generating funds. He directed the FBR to fine-tune the scheme to make it simple to understand and easy to implement, an official statement said, adding that the objective of the scheme should be to make the economy more tax-compliant and documented.