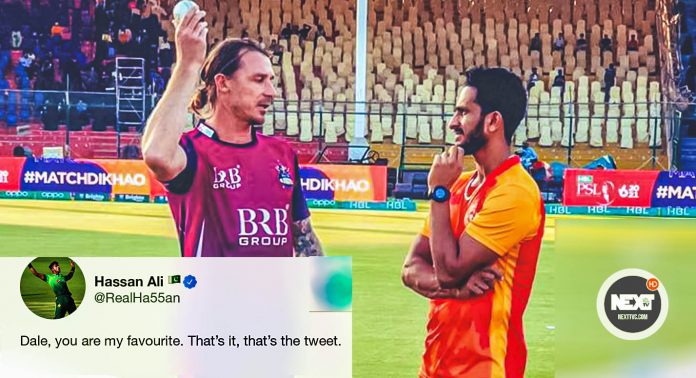 Islamabad United and Pakistani pacer Hasan Ali said on Tuesday that South African pacer Dale Steyn is his hero after his side defeated Quetta Gladiators in their Pakistan Super League (PSL) clash.

“Dale, you are my favourite. That’s it, that’s the tweet,” said Hasan along with a picture of him and the South African pacer.

Dale, you are my favourite. That’s it, that’s the tweet. pic.twitter.com/bUNG8IdjLc

Soon after the post was shared, Steyn responded to Hasan and lauded him for his bowling against Quetta.

Well bowled again bud! When you’re in a purple patch, run with it, and you’re doing just that! 👊 https://t.co/huYSLSEgGF

“Well bowled again bud! When you’re in a purple patch, run with it, and you’re doing just that!” said Steyn.

The picture was posted on Hasan’s Twitter after his side defeated the Quetta Gladiators.

The Islamabad United defeated win-less Quetta Gladiators with six wickets in hand in the 12th match of the PSL.

The United’s Paul Stirling hit an early half-century to build off the spells from Hasan Ali and Faheem Ashraf in the first innings — that had restricted Quetta Gladiators from scoring.

The side chased an easy 157-run target — on a pitch that has seen nearly 200 being chased — as their openers performed well.

Earlier, the Gladiators’ opening order collapsed in the power play, however, skipper Sarfaraz Ahmed (54) and Mohammad Nawaz (31) led the way from then onwards — which was not enough.

The game was delayed yesterday after a player from Islamabad United, Fawad Ahmed, tested positive for coronavirus.

Quetta Gladiators haven’t had the start they wanted in the tournament, losing all three games initially, as they were first outplayed by the Karachi Kings before being knocked out by Lahore Qalandars and Peshawar Zalmi.