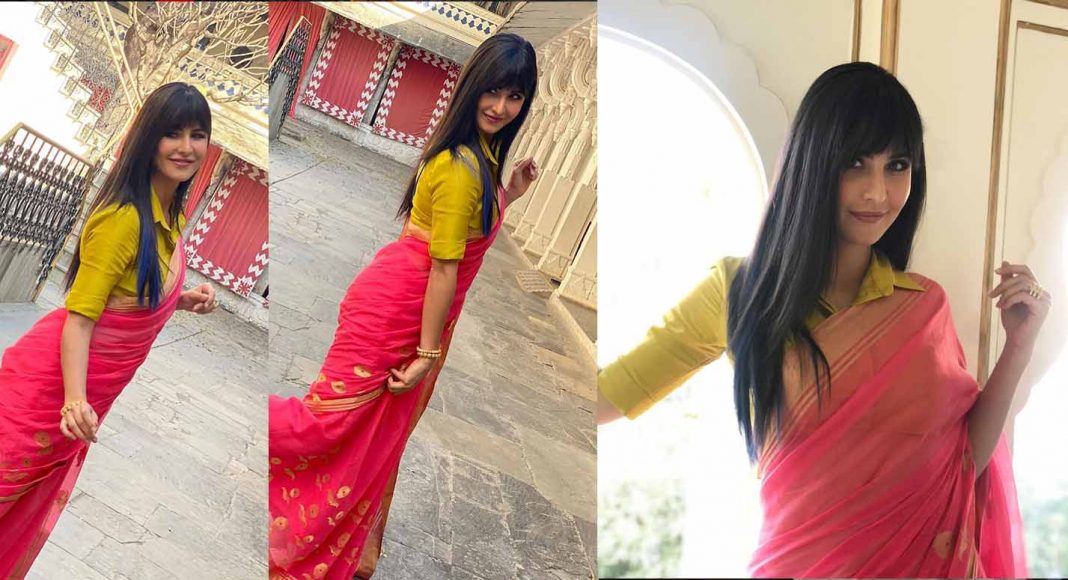 As Katrina Kaif prepares to promote her forthcoming movie, Phone Bhoot, all eyes are on her. The actress released images of her new look while on a promotional blitz.

One of the most adored Bollywood actresses is Katrina Kaif. She never misses an opportunity to astound her fans with her sense of style and appearance. She frequently posts images and videos of herself to keep her followers informed about her happenings. The actress is currently getting ready for the premiere of Phone Bhoot, in which she co-stars with Ishaan Khatter and Siddhant Chaturvedi. She is doing everything in her power to promote the movie, and today she shared a few photos of herself wearing a saree and showing off her new hairstyle on social media.

In the photos she provided, we can see Katrina Kaif wearing a pink saree with a golden border. She wore her saree with a lime green shirt that had elbow-length sleeves and a stylish collar. She is posing and gazing into the camera in the first shot. The Phone Bhoot actress has a new hairdo, and her bangs do really suit her well. The interesting shoes she was wearing beneath her saree in the following photo, where she is posing with one foot up, caught our attention. Her Phone Bhoot co-star Ishaan Khatter posted, “Fringini is back,” in the comments section.

In front of Katrina Kaif’s career

Alongside Ishaan Khatter and Siddhant Chaturvedi, Katrina Kaif will next be seen in the forthcoming horror comedy Phone Bhoot, which is set to release in theatres on November 4, this year. A Merry Christmas with Vijay Sethupathi, Jee Le Zaraa with Alia Bhatt and Priyanka Chopra, and Tiger 3 with Salman Khan and Emraan Hashmi are just a few of the actress’s highly anticipated upcoming projects.

Malala Yousafzai and her family pay a visit to the Dubai...