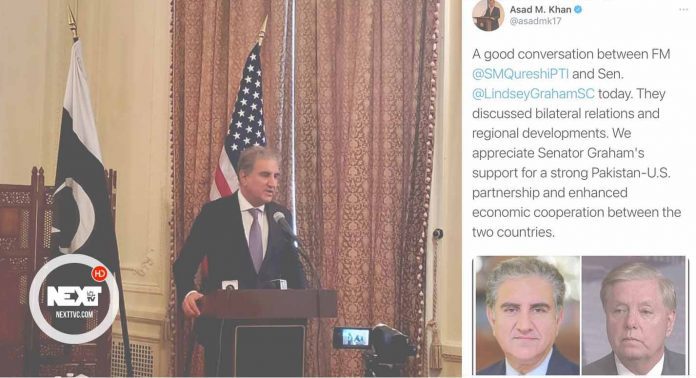 The Foreign Minister and Senator Graham discussed bilateral relations and the regional situation.

Foreign Minister Qureshi appreciated Senator Graham’s efforts for strengthening the Pakistan-U.S. partnership. He underscored that Pakistan wanted to forge closer economic and trade linkages with the US. In this regard, the Foreign Minister and the Senator also agreed to further enhance bilateral cooperation in the agricultural sector, especially for enhancing agricultural productivity in Pakistan.

The Foreign Minister said that Pakistan would continue to support efforts for achieving an inclusive political settlement in Afghanistan.

He underscored the imperative of reduction in the violence leading to a comprehensive ceasefire. The Foreign Minister also stressed the importance of orderly and responsible withdrawal of foreign forces. He underlined that peace in Afghanistan was the shared responsibility of all Afghan parties as well as key international stakeholders.

Senator Graham appreciated Pakistan’s continued support of the Afghan peace process. He hoped that closer economic engagement between Pakistan and the United States would also contribute to regional peace and stability.

The Foreign Minister extended an invitation to Senator Graham to visit Pakistan, which he accepted.