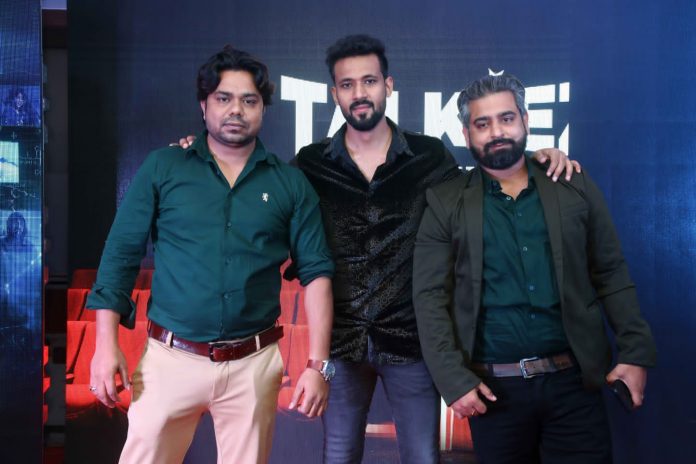 Buoyed by the growing number of movies and viewership on the digital platform, Big Curtain Info Media Pvt Ltd, the world’s leading film distribution company for the last 15 years, is also coming up with the hybrid OTT platform #TALKIEZ.

Its launch program was organized at Hotel Lalit in the capital, in which many artists and directors associated with ‘Talkies’ participated and answered the questions of the media. Actors Aryan Vikal and Karan Mann, ‘Maqbool’ and ‘Mirzapur’ fame actors Shaji Chaudhary, actress Supriti Batra, directors- Anil Sharma and Honey Rawat were present at the launch event.

Through this platform, the company will not only try to redefine the definition of entertainment but will also set benchmarks in terms of revenue and fair business practices as the audience on the hybrid OTT platform #TALKIEZ will be able to enjoy high-quality web- Series, movies, reality shows, events and many more.

Shakeel Hashmi, who has been a producer, aggregator and distributor for the past decade and a half, says, “We aim to not only share engaging content with audiences but also reach two-thirds of the cities across the country,

Major personalities have contributed. These include visionary and creative personalities like Byju C Nair, MBA from University of Mumbai with over 20 years of practical experience with financial start-ups, while also recognized for wealth creation ideas for IT geeks and stock market professionals for the past.

Tarun Santani is a Finance and Accounts graduate for IT, Media and Stocks. Yatin Rao, a professional businessman having a long business development career with top corporate like Motilal Oswal, Kotak Sector, SHARE and Religare, an expert in post-production technical aspects and expert in getting the film ready for promotion and release And also got the support of Like Ahmed Hashmi, who received Advance Diploma in Post Production.

One can say that launching engaging storytelling forms to multiple digitally-led innovations in all verticals sets Talkiez apart from others. That’s why Talkiez is now live on the Play store and iOS.Talkies will be available on mobile phone, that too in a different way because there will be content that you have never seen before.

Of course, you will only find it available on the Talkies app. Shakeel Hashmi says, “The allure of Bollywood will never fade and hence we got all the blockbuster movies on our platform without any glitch. Well, Talkies plans to keep its subscription rate light on the pockets of the viewers.

One can say that we are going to have a big explosion on the OTT platform, be it tie-ups, TV promotions, social media promotions, direct selling, our 360-degree promotion strategy will leave no stone unturned. Talkies aims to go live on at least 1.5 million mobile phones by the end of this financial year and aims to serve over 50 million customers in the next five years (by 2025).