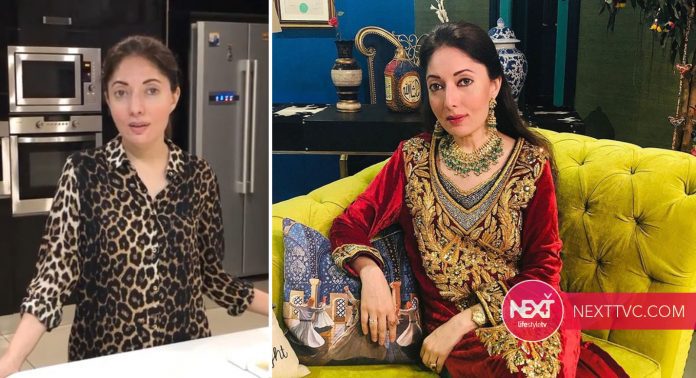 Sharmila Farooqi has laughed off the criticism on social media. In her latest social media post, she said that she realized her slip. However, she is not accepting it as a serious blunder.

Perhaps, Farooqi failed to explain correctly what she was cooking. Sharmila Farooqi begins the video by telling her followers that she is making pan-sauce chicken fillet with lemon sauce but picks up a piece of red snapper fish.

At first, it was assumed a slip of tongue but she continued to call the piece of red snapper fish a chicken fillet multiples times in her video.

“I’m taking one chicken fillet because I’m just making it for myself. I’ve taken the chicken fillet and cut off its tail, divided it into two pieces. This is red snapper, it’s a white fish, very tasty and we’re going to garnish it first,” said Sharmila Farooqi.

”She is glad that people were cheered up due to her during these troublesome times.”

The utter confusion between a fish and chicken and cutting the ‘tail of a chicken fillet’ gave social media users fits of laughter. The video of Sharmila Farooqi went viral on social media instantly.

Aren’t you glad I’ve provided much comic relief in these depressing times?I am!Didn’t know I could create such hysteria with a simple slip of the tongue.Though this virus & the misery thereof hasn’t taught us much,we still don’t leave any opportunity to bring down ppl https://t.co/bgcugTZIoj

Sharmila Farooqi has taken to social media to show off her cooking skills ever since the lockdown imposed across the country as prevention against coronavirus.

In the past couple of days, she has posted multiple videos of cooking tutorial making different recipes in her kitchen. However, a gaffe in the latest video brought her public embarrassment.

Not only Sharmila Farooqi, but several people have turned to their kitchen to make delicious recipes at home as eateries and restaurants are shut due to strict lockdown in the country.

Sharmila Farooqi has sided with politics and is busy with her domestic life ever since her marriage. When active in politics, she served as an advisor to former CM Sindh.

She, however, has laughed off the criticism and mockery with grace on social media with a brave heart. In her latest Instagram post, she said that she realized about her slip of tongue later. Commenting further, she did not assume it as a serious blunder.