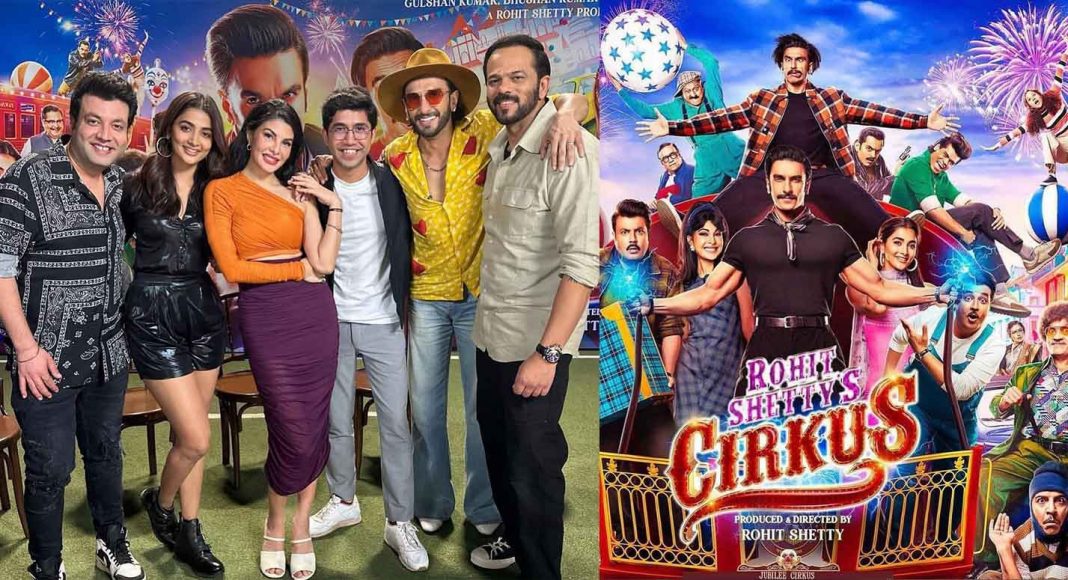 On its first day of release, the Ranveer Singh and Rohit Shetty film Cirkus sold 3 lakh tickets and earned 6.25 crore rupees (about $1.1 million).

The lacklustre opening suggests that the trailer for Cirkus failed to excite potential viewers, since one would expect a comedy starring Rohit Shetty and Ranveer Singh to generate significantly more interest.

With Ranveer Singh in the lead role, the Rohit Shetty comedy Cirkus is off to a sluggish start at the Indian box office. Low attendance was seen throughout the day due to the comedy of errors, which may explain its estimated Rs 6.25–6.50 crore in first-day earnings. Cirkus opened with nearly 10,000 performances but only managed a 12-percent occupancy rate throughout the day. This was far lower than had been anticipated. It was predicted that the picture would open to Rs 15 crore, but sometimes even the most significant movies fail to deliver. The present instance fits that description.

As expected, Cirkus gets off to a shaky beginning.
The three national chains generated half of the revenue (PVR, Inox, and Cinepolis). PVR earned a net of Rs 1.50 crore, while Inox and Cinepolis took in a combined Rs 1.70 crore. While Rohit Shetty movies have traditionally done well in Gujarat, where the market is known to score big for comedy flicks, the statistics from the Gujarat belt have been the biggest surprise. The film’s performance in the Mumbai area has also been disappointing since most people would rather see Avatar: The Way of Water in the theatre.

Given the poor opening and negative word of mouth, the film will need to see massive increases on Saturday and Sunday to salvage the situation.

Since the prices were already at blockbuster levels, the number of visitors is likely to be significantly lower. It will be interesting to see if the movie benefits from being released during Christmas. Hindi films had a terrible year overall, and the start of Cirkus suggests that Christmas will be uneventful as well, despite being released during the lucrative seasonal window of Eid, Independence Day, and Diwali. The lackluster opening indicates that the teaser for Cirkus failed to excite moviegoers, who, on paper, should have been more interested in a Rohit Shetty comedy starring Ranveer Singh and the rest of the cast.

Will Saturday and Sunday bring a better performance from Cirkus?
Cirkus’s fate is set at this point, but the company has a slight chance of saving face if attendance goes up on the weekends and stays the same from Monday to Friday. However, this seems unlikely, given the poor quality of the ground-level report about the content. On its first day of release across the country, the film sold approximately 3 lakh tickets. Cirkus is turning out to be one of Rohit Shetty’s rare flops, and this has given a voice to people who have been silent for the past 15 years in anticipation of the man’s failure. But, with Singham back, he will undoubtedly be even more potent than before. Even the most famous directors have experienced setbacks at some point. Failed projects are an inevitable part of the creative process.

Ranveer Singh will next be seen in Rocky Aur Rani Ki Prem Kahani, starring opposite Alia Bhatt and directed by Karan Johar. With stars like Dharmendra, Jaya Bachchan, and Shabana Azmi, the film will surely be a hit. According to the current production schedule, Singham Again will begin principal photography in April and run in numerous locations until its completion. Ajay Devgn, Ranveer Singh, and Deepika Padukone are the stars, and Rohit Shetty is the director.

Morning showings of Cirkus have seen a slight increase in ticket sales, so it will be interesting to see how the afternoon and evening performances shape up for the film’s second release day.

Sajjad Ahmed - March 17, 2021
Preserving the emerging recognition of cryptocurrencies in the region, the government of Khyber Pakhtunkhwa has lanced Pakistan’s first-ever Crypto Advisory Committee. Advisor to the Chief...