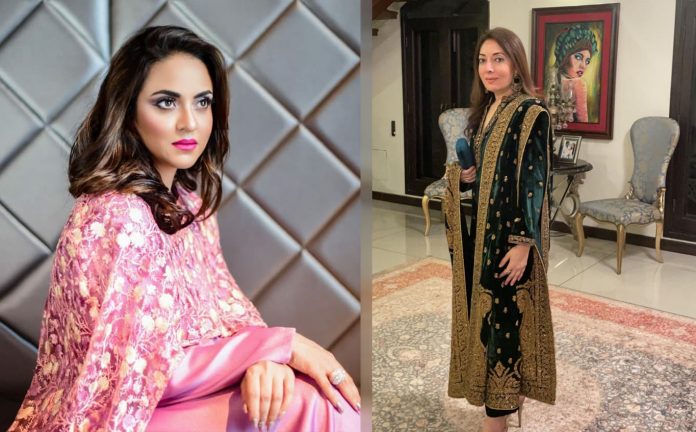 Nadia Khan was served with a Rs50 million defamation notice on Saturday by Sharmila Faruqui’s legal team for her viral video in which she appears with her mother.

The letter, which Nadia shared on her Instagram Stories, claims that she “violated her mother Anisa Farooqi’s privacy and insulted her over her cosmetic appearance” in a “defamatory video” she posted to her Youtube account.

Nadia has 15 days to recant her words, apologize, and pay Rs50 million in damages, according to the notification. According to the legal notice, “I am serving this notice on behalf of Sharmila Farooqi, Member of Sindh Provincial Assembly, who has instructed me to serve upon you the following legal notice under Section 8 of the 2002 Defamation Ordinance on account of a defamatory video published by you on your YouTube channel Outstyle, on January 20, 2022.”

“My client is a well reputed politician and you have tainted her persona as a result of the abovementioned video. It is a well-known fact that anyone who runs a YouTube channel gets remuneration for views and engagement. Hence, by posting hate speech against my client, you are trying to create a controversy just to get noticed,”

it goes onto claim. Adding that

“it is unfortunate” that a known media professional like Nadia, “is posting with such reckless disregard.”

Nadia found herself in deep water when a video of her ‘complimenting’ Anisa Farooqi on her cosmetics and sense of style surfaced. Nadia’s comments didn’t sit well with Sharmila and many viewers who thought she was joking. Sharmila called it a joke and said she would sue the presenter if she didn’t stop it immediately. Sharmila also filed a complaint against Nadia with the FIA on the same day. “I’m reporting her to cybercrime officially,” the lawmaker said alongside the footage posted to an Instagram page.

Nadia, who met Anisa at a wedding, inquired about her plans for the future “Who does your make-up? Wow, it’s really stunning.” When the host-cum-actor asked Anisa where she learned to do it, she praised her daughter Sharmila, who is also an actress. Nadia also complimented Anisa on her clothing, jewelry, and cosmetics, while Anisa replied to all praises and queries without questioning Nadia’s motives. Her daughter seemed to be convinced that Nadia did not intend any harm, despite her issuance of a statement in response.