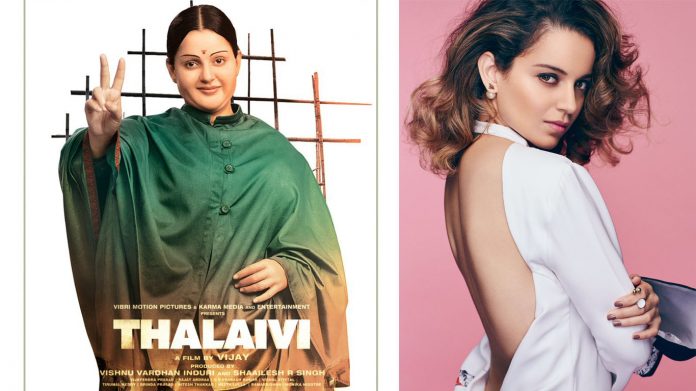 The first teaser of Kangana Ranaut’s Thalaivi, directed by AL Vijay, released to a tremendous thumbs-up from the audience last month. The Hindi-Tamil-Telugu trilingual produced by Vishnu Vardhan Induri and Shaailesh R Singh (under their respective banners Vibri Media and Karma Media and Entertainment), is a biopic based on the life of former Chief Minister of Tamil Nadu, J Jayalalithaa.

While Kangana plays the title role, Arvind Swami plays the role of actor-filmmaker-politician MG Ramachandran. We have come to know exclusively, that, in a unique promotional campaign to make the movie one of the biggest releases of 2020, the makers plan to release a surprise teaser or picture of the characters, (like MG Ramachandran and Telugu star Sobhan Babu), of Thalaivi every month – leading the movie’s release on June 26, 2020.

Producer Shaailesh R Singh informs, “We want Thalaivi to be one of the most anticipated movies of 2020 so with the teaser we wanted to set the tone from the beginning. We wanted to also announce the release date (June 26) with the teaser and we have planned a huge build-up in the first six months leading to the release. From here (with the teaser launch) we will continue our publicity and promotional strategy. There are lots of things that are going to happen.

We will be revealing more looks within every 15-20 days because there are so many characters in Thalaivi and we must introduce them too. Every month we will have a different surprise because we aspire to make Thalaivi one of the biggest films of next year and not just in terms of budget, but the content is also huge. Her journey is an amazing one – unbelievable, beginning as an actress and then becoming one of the most fearless politicians of our times.”

Shaailesh R Singh says, “We have got extraordinary reactions from everywhere – from the audience to the people and the film industry. Everyone has loved the trailer. Kangana was meant to do this role – she shares so many similarities with Jayalalithaji, including her personality.

When the subject came to me, I was clear that the only person who should be doing it, is Kangana Ranaut and today the acceptance and appreciation that has come after the teaser released, feels great. The hard work she has put in, including learning Tamil and the transformation, she has put in so much, is justified. The kind of sincerity, hard work, passion, and commitment you expect from an actress, is something only Kangana can give today.”

The planned campaign included the Thalaivi teaser launch in November this year. Shaailesh adds, “We didn’t want to take the risk of the first look of Thalaivi (the teaser) appearing randomly anywhere as it would have spoiled the reactions and our efforts. It’s the most expensive and biggest film of our career and when you are not taking a studio it is a big challenge for us also.

Initially, after the they were all stunned with Kangana’s transformation as they couldn’t believe it but then they praised it. It was a happy stunned kind of feeling. As producers, we are thrilled at the response the teaser has got, though it’s put a little more pressure on us to even better ourselves every time. It’s a very big budget movie, mounted on a grand scale and the teaser was just a glimpse of what it actually will be.”