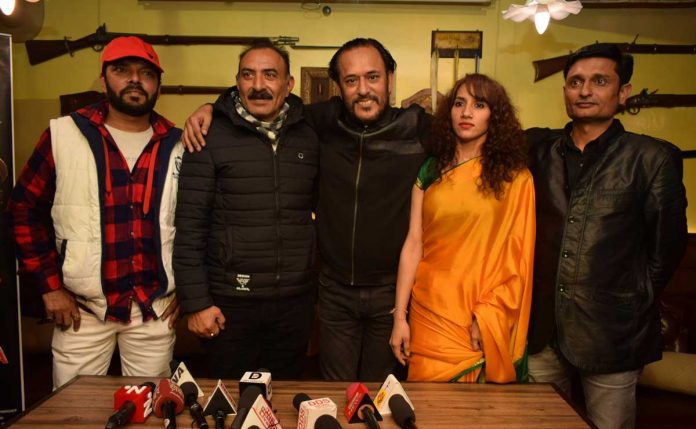 Recently, movie Antervyatha star cast- Kuldeep Sareen and Veena Choudhary along with singer Tochi Raina came to Delhi for the promotions. Director Keshav Arya was also present at the event held in 38 Barracks, Connaught Place. The movie is set to release on 3 January 2020.

The movie is a suspense thriller based on a person called Rajat who is trapped between his girlfriend and wife and to free himself from this situation, he wants to get away from any one of them. In this state of dilemma, he has committed a crime. This movie is produced by Deepak Vashish, Bharat Kavad, Dinesh Ahir and co-produced by Akshay Yadav.

Present at the event, Director Keshav Arya spoke about the film,

” This movie is made with a lot of efforts. I used to do theatre earlier and I have tried my best to put in this film as a director. I approached actors and Singer Tochi Raina to help me out in this project and they were very supportive.”

Actor Kuldeep Sareen spoke about small budget films, ” This is phenomenal how a person from the theatre has directed a film and arranged finances for it. It a very long journey which Keshav has gone through. Actors like us should come forward to support these films and encourage new talent.”